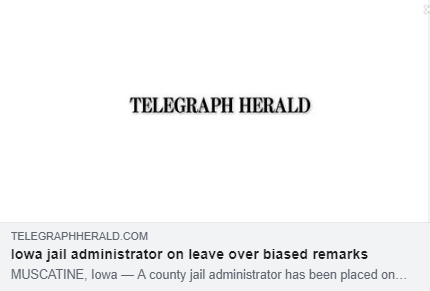 (WASHINGTON, D.C., 4/25/20) – The Council on American-Islamic Relations, the nation’s largest Muslim civil rights and advocacy organization, today welcomed a decision to place Muscatine County, Iowa, Jail Administrator Dean Naylor on temporary leave pending an investigation in response to recent revelations that Naylor posted 11,500 word online treatise titled,  “End Times — We Are Here!!,” characterizing all Muslims as the “pawns of the devil” and the “beast” that will sometime soon “hunt” all Christians and Jews.

Naylor has also posted on YouTube that he believes such a conflict between Christians, Jews and Muslims will occur between 2016 and 2023, and result in the death of one-third of mankind.

“We welcome the decision to place Mr. Naylor on leave pending the results of an internal probe and hope appropriate action is taken based on the results of that investigation,” said CAIR Director of Government Affairs Department Robert S. McCaw. “Those in positions of authority over others must be held to a high standard of conduct.”