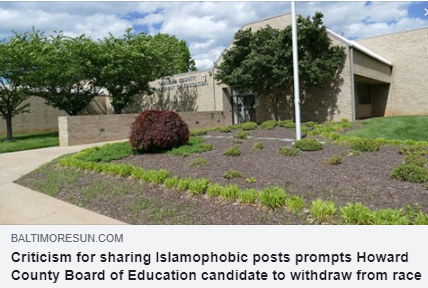 (BALTIMORE, MD, 5/20/20) – The Council on American-Islamic Relations (CAIR) today welcomed an apology from a candidate formerly seeking a seat on the Howard County Public Schools Board of Education who shared Islamophobic posts on his social media.

CAIR also offered to engage him in dialogue to help repair harm and improve interfaith relations.

Gian Alfeo, whose name is on the ballot for councilman district 3, but who has since stated his plans to drop from the race, had expressed support for posts that falsely correlated the terrorist group ISIS with Islam and called for a backlash against Muslims, among several controversial messages.

In a statement posted to his page, he said in part:


“I have learned a great many things on this brief journey. After reviewing my past, I have decided that I am not the best candidate for such a position. It is with sincerity that I apologize to any community member that has been offended by my transgressions. I am embarrassed by the FB posts that were mined from my account. I regret that I have lost the respect of many friends and community members during this process. It is my hope that over time I will be able to rebuild the trust and respect that has been lost during this campaign.”

CAIR’s Director in Maryland Zainab Chaudry said in a statement:

“Our organization does not take a position on whether candidates should seek public office, regardless of their political affiliation. We do however call on all who seek positions of authority to use their influence to unite our communities around shared values. While people might have different ideas on how to move our county forward, we can express these ideas without resorting to bigotry that harms others and causes more hatred and divisiveness in society. CAIR welcomes Mr. Alfeo’s apology and invites him to engage with us in dialogue in the hope that everyone involved in this distressing situation might emerge from it with a renewed commitment to promoting tolerance and inclusivity in Howard County.”

Last week, CAIR condemned the posts in a statement after being alerted by contacted by numerous concerned community members and stakeholders.

“As an active parent in this district’s school system, I was horrified, disgusted and frankly terrified when I saw the discriminatory memes on Gian Alfeo’s page,” said HCPSS Parent Khaleda Hasan who is one of the community members in touch with CAIR. “I am relieved to hear that he has announced he is withdrawing from the race, but witnessing some BOE officials and BOE candidates either ignore or fail to unequivocally condemn this kind of bigotry reminds me how much work remains in building inclusive communities.”

“Values are critical when making decisions about the education of 59,000 schoolchildren in Howard County,” said HCPSS Board of Education member Sabina Taj. “Hateful memes would be troubling coming from anyone, but particularly so from someone who is asking the community to entrust them to oversee a school system that educates many students of the populations targeted in these posts.”

The civil rights organization expressed its gratitude to Councilwoman Christiana Rigby, Maryland State Delegate Jessica Feldmark, and especially Jewish faith leaders who reached out to CAIR and the local Muslim communities to reject the hateful messages and express faker solidarity and support.