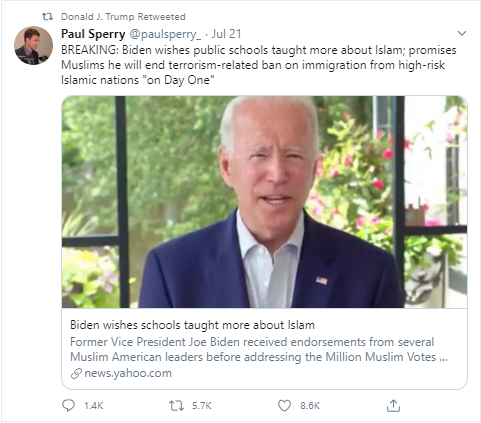 According to the Southern Poverty Law Center (SPLC), Sperry has claimed that Muslims have been working for 30 years to infiltrate and “destroy our constitutional government.”

Earlier this year, CAIR condemned Trump’s promotion of a different tweet by Sperry that baselessly questioned whether U.S. mosques will be treated differently during the month of Ramadan than churches were treated during Easter amid the COVID-19 pandemic lockdown.

“President Trump’s continued attempt to use Muslim Americans as a political football is as despicable and dangerous as his promotion of anti-Muslim bigots and conspiracy theorists like Paul Sperry.

“Every American who values a free and inclusive society should be happy to see Muslim Americans engaging in the political process. Bigots who feel otherwise should sit at the fringe of society and should never receive credibility from the Oval Office.”

SEE: CAIR Says Trump’s Defense of Confederate Flag Puts Him ‘on the Side of Racists and Traitors’