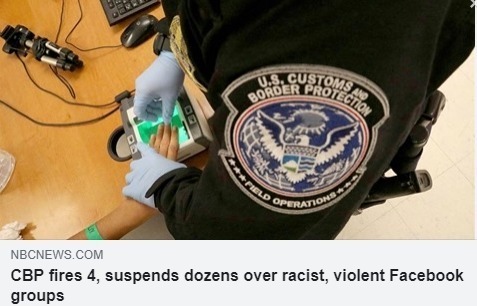 The CBP actions come after an investigation into the notorious Facebook group known as “I’m 10-15.” Sixty-three of the allegations made against CBP employees were unsubstantiated. The disciplinary actions were reported today in a statement to NBC News.

“CAIR welcomes CBP’s disciplinary actions against officers who posted racist, sexist and violent views on the private Facebook group ‘I’m 10-15,'” said CAIR Director of Government Affairs Department Robert S. McCaw. “The bad example set by President Trump’s grotesque misuse of social media to spread xenophobia and racism must not be allowed to spread within the ranks of federal employees. CBP must remain vigilant to ensure that those employees who were only disciplined are not in a position to turn their abhorrent views into discriminatory actions targeting migrants.”

McCaw noted that last month the San Francisco Bay Area office of CAIR called for the chief of the San Jose Police Department to terminate officers involved in Islamophobic and racist postings on a private Facebook group named 10-7ODSJ. Since CAIR’s call, four of the officers involved in the private Facebook group have been placed on administrative leave while officials investigate their posts.

On July 1, 2019, ProPublica first reported that it had identified some 9,500 current and former border agents are part of the private Facebook group in which members referred to a drowned migrant father and his toddler as “floaters” and joked about tossing burritos at Hispanic members of Congress. Based on that report, CBP started its internal investigation.

The following day, CAIR called for congressional hearings on reports of racist and sexist social media postings by U.S. Customs and Border Protection (CBP) officers in a Facebook group known as “I’m 10-15.”

CAIR’s Maryland office also joined Catonsville Indivisible and Indivisible Central Maryland at a rally in Catonsville, Md., outside then Congressman Elijah Cummings’ office to call on Congress to close the camps in which migrant children are being detained and to use federal funding to reunite immigrant families.

On July 29, 2019 the U.S. House Committee on Oversight and Reform led by Chairman Cummings sent a letter to CBP requesting documents relating to the Committee’s investigation into secret Facebook groups.