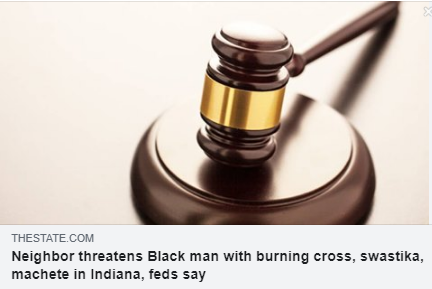 (WASHINGTON, D.C., 8/7/2020) –The Council on American-Islamic Relations (CAIR), the nation’s largest Muslim civil rights and advocacy organization, today welcomed charges against a man who burned a cross and displayed a Nazi swastika allegedly to intimidate his Black neighbor in Lawrence, Ind., and condemned distribution of white supremacist material in Cedar Rapids, Iowa.

Federal prosecutors report that Shepard Hoehn, 50, created a Nazi swastika display and burned a cross on the fence line facing his neighbor’s property. He also allegedly created a large sign near the swastika with racial slurs with a machete displayed nearby.

CAIR also condemned the distribution of white supremacist material in Cedar Rapids, Iowa, in which resealable plastic bags were found that contained a letter with a Nazi swastika and the words “White Pride” on it.

“We condemn all acts of racist and white supremacist intimidation and urge community members and public officials to join in speaking out against the unfortunately growing bigotry we are witnessing nationwide.”