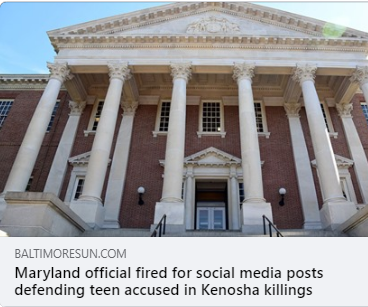 Love’s posts mocked the victims of the shooting, calling them thugs and criminals, and praised the actions of Rittenhouse by claiming it was “self-defense.” Love reportedly has a long history of making racist social media posts on his page.

Executive Director of the Governor’s Office of Community Initiatives Steven J. McAdams issued a statement Saturday stating: “These divisive images and statements are inconsistent with the mission and core values of the Office of Community Initiatives. Earlier today, I relieved this employee of his duties. Kevin Craft, administrative director of the Governor’s Commission on African Affairs, will assume these duties effective immediately.”

“While CAIR applauds the Hogan administration for taking appropriate action in this case, we urge the governor to also take this opportunity to review internal policies and codes of conduct to avoid a repeat of this disturbing incident in the future,” said Director of CAIR’s Office in Maryland Zainab Chaudry.

Yesterday, CAIR demanded that law enforcement authorities end their “torture” of Jacob Blake, who was shackled to his hospital bed.