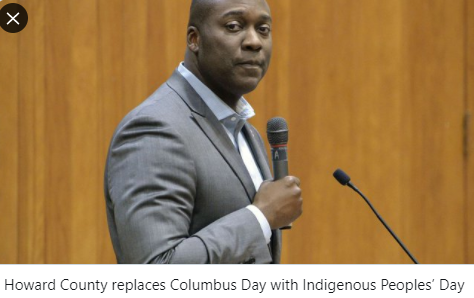 (BALTIMORE, MD, 9/16/2020) — The Maryland office of the Council on American-Islamic Relations (CAIR) today welcomed a move by the Howard County to replace Columbus Day with Indigenous People’s Day. The October holiday has been swapped out in order to honor indigenous peoples’ history and culture. Many states have made similar moves, and CAIR is urging other counties across Maryland to take the moral decision to also adopt Indigenous Peoples’ Day.

The federal holiday, Columbus Day, has been used to celebrate Christopher Columbus since his arrival in the Americas. Over the past years, members of the public have applied pressure on states to change the holiday due to Columbus’ genocidal history and colonizing of the Native Americans.

Howard County Executive Calvin Ball said the new holiday is meant to “rectify” the harm put upon Native Americans and recognize their history. In a statement to media, he said:

“Indigenous and Native American history is embedded in our nomenclature and our geography — Patuxent, Potomac, Kittamaqundi. And yet there is a clear erasure of their history and their connection to our land. Indigenous Peoples’ Day presents an opportunity of all ages and backgrounds to learn more about the people who were here before Columbus and colonization. Representation matters, but it must be more than a rallying cry.”

“As a member of a minority community myself, seeing indigenous people being able to reclaim their history and publicly celebrate their heritage is amazing,” said Yasmeen Elkoshairi, CAIR’s public relations and media intern in Maryland. “Indigenous peoples were the backbone of our country and have been silenced too often and denied the right to educate others about their culture and history. They deserve to have at least one day fully devoted to them.”