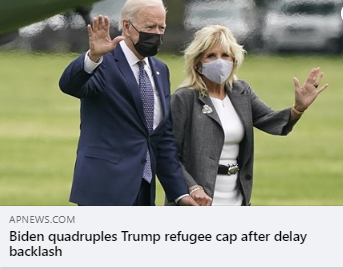 (WASHINGTON, D.C., 5/4/21) – The Council on American-Islamic Relations (CAIR), the nation’s largest Muslim civil rights and advocacy organization, today welcomed both President Joe Biden’s decision to raise the United States’ 2021 refugee admissions cap from 15,000 refugees to 62,500 refugees and his pledge to further increase the cap to 125,000 refugees in 2022.

SEE: White House: Memorandum for the Secretary of State on the Emergency Presidential Determination on Refugee Admissions for Fiscal Year 2021

The increase in the refugee cap comes weeks after pushback from civil rights groups, immigration rights activists, legislators and others who decried President Biden’s initial claim that the prior administration’s “cap of up to 15,000 remains justified.”

The 15,000 cap on refugee admissions was a record low for the United States.

“CAIR welcomes President Biden’s decision to raise the nation’s 2021 refugee cap to 62,500 and his pledge to increase the cap to 125,000 in 2022. Raising the nation’s refugee cap from its historic low was the morally correct decision and a first step to undoing the prior administration’s xenophobic policy of punitively targeting those seeking refuge in our nation as part of an effort to maintain systemic anti-Black racism and white supremacy.

“The American Muslim community is determined to ensure the rights of every immigrant are upheld and our nation remains a place of safe haven for refugees and asylum seekers.”

The Biden Administration’s increased 2021 refugee cap of 62,500 is broken down internationally by region for admission into the United States:

In March, CAIR welcomed the re-introduction of the Guaranteed Refugee Admission Ceiling Enhancement (GRACE) Act.  The GRACE Act strengthens the Refugee Act of 1980 by preventing the U.S. President from setting a Presidential Determination on Refugee Admissions at a level below 125,000.

SEE: CAIR Welcomes Reintroduction of Bill to Reestablish US Commitment to Welcome Refugees

Last year, CAIR welcomed a ruling by a Maryland judge stating that the prior administration cannot give state and local governments “veto power” to reject refugees from resettling within their borders.

CAIR also condemned the prior administration’s decision to slash refugee admissions to a historic low.