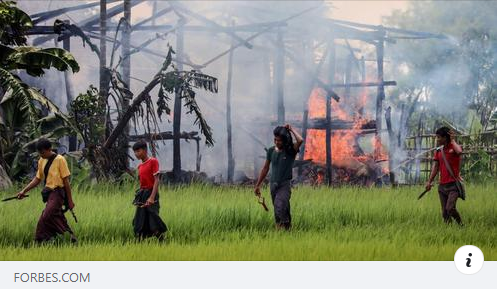 (WASHINGTON D.C., 9/23/2021) – The Council on American-Islamic Relations (CAIR), the nation’s largest Muslim civil rights and advocacy organization, today welcomed a decision by a U.S. federal judge ordering Facebook to release records of anti-Rohingya content posted on the website. CAIR also welcomed a decision by the State Department allocating an additional $180 million in aid for Rohingya refugees.

On Wednesday, a U.S. federal judge ordered Facebook to release content inciting genocide against Myanmar’s Muslim Rohingya ethnic group to investigators seeking to prosecute Myanmar for international crimes. He criticized the social media platform for its failure to provide the content. Facebook has refused to release records of the content, claiming that doing so would violate a U.S. law barring communication services from disclosing users’ communications. The judge said the content would not be covered under that law and that not sharing it would “compound the tragedy that has befallen the Rohingya.”

Also on Wednesday, the U.S. State Department announced an additional $180 million in aid to over 700,000 Rohingya refugees from Myanmar. A State Department spokesperson said that with the additional $180 million, “our total humanitarian assistance for this response reaches more than USD 1.5 billion since August 2017.” The spokesperson called on the Myanmar junta to immediately stop the violence in the country, release all those unjustly detained, restore the nation’s path to democracy, and implement ASEAN’s Five Point Consensus. He also called on Myanmar authorities to allow “immediate and unhindered humanitarian access” to those in need, including the delivery of critical COVID-19 assistance.

“The military dictatorship of Myanmar has been engaging in a campaign of genocide and ethnic cleansing targeting the Rohingya Muslims. Hundreds of thousands of Rohingya have been forced to flee their homes to escape mass killings, rape, and other heinous crimes. Any corporate entity that provides a platform for the incitement or planning of such atrocities must be held to account.

“We welcome the court decision ordering Facebook to release records of content targeting Rohingya Muslims, and urge the Biden administration to hold all corporations that platform such content or benefit from genocide and human rights abuses to account.”

Mitchell noted that earlier this week, the #BoycottHilton Coalition, of which CAIR is a member, called on the UN Global Compact to remove Hilton Worldwide as a participant due to its plans to build a hotel over a bulldozed Uyghur mosque in China.

He also noted that CAIR applauded a letter by the Congressional Commission on China calling on Hilton to drop its project.

“Rohingya refugees are in desperate need of aid, and we applaud the State Department for allocating additional funding to help save lives. We encourage the Biden administration to continue to pursue a human rights-centered foreign policy.”

McCaw noted that CAIR welcomed the inclusion of Myanmar in the State Department’s 2021 genocide report.

CAIR has also called for charges of crimes against humanity after Myanmar soldiers confessed to genocide against the Rohingya.