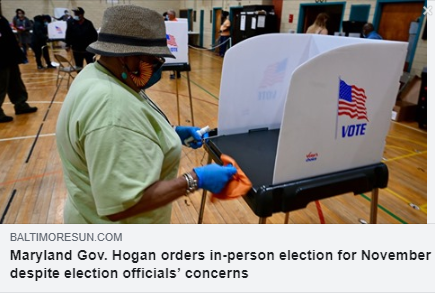 These enhanced options include:

“We encourage Muslim voters to request absentee ballots to vote by mail if possible, and, in cases in which it is not possible, to plan on voting in person abiding by the recommended guidelines for preventing the spread of COVID-19 as outlined by the CDC,” said CAIR Government Affairs Intern in Maryland Huzzaifa Muhammad.

CAIR estimates there are well over 1 million registered American Muslim voters in the United States, with large communities residing in key swing states.

BACKGROUND ON VOTING IN MARYLAND:

Amid concerns about securing adequate poll workers during the pandemic, Governor Hogan sent a letter to the State Board of Elections pledging to provide the state’s assistance to facilitate the election process.

He instructed them to provide enough accessibility to voters to cast their vote to increase voter turnout as much as possible, acknowledging that “providing citizens with accessible, accountable, and transparent ways to cast their ballot is an essential component of our democratic republic.”

The State Board of Election was heavily criticized for rampant issues that arose during the primary election.