DC: Coalition to Hold News Conference to Call for the Release of Pakistani National Dr. Aafia Siddiqui from Texas Prison 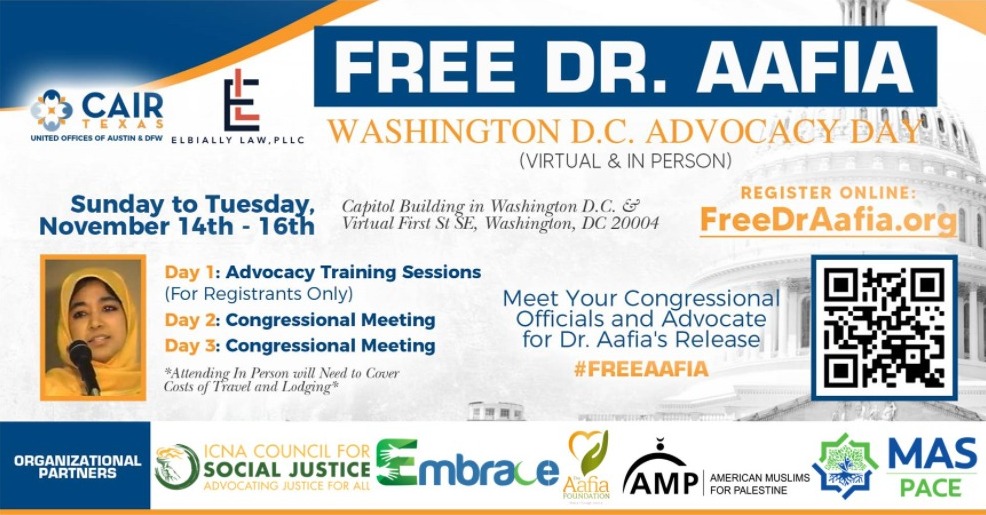 (WASHINGTON, D.C., 11/12/2021) – On Monday, November 15, the Council on American Islamic Relations (CAIR), the nation’s largest Muslim civil rights and advocacy organization, along with the Elbially Law practice will hold a press conference on Capitol Hill in Washington, D.C., to call for the release of Pakistani National Dr. Aafia Siddiqui who is currently imprisoned in Texas.

That news conference is part of the Free Dr. Aafia Washington D.C. Advocacy Day, which is designed to educate members of Congress and their staff about the case.

US Protestors Demand Release and Reparations for Dr. Aafia

Coalition representatives will meet with various Congressional offices in person and virtually.

“Dr. Aafia Siddiqui is serving an unjust 86-year prison sentence for a crime that she did not commit,” said Faizan Syed, Executive Director of CAIR-Dallas. “We are holding the first in a series of congressional advocacy days to let members of Congress know that their constituents demands the immediate release of Dr. Aafia to her home nation of Pakistan.”

“Dr. Aafia Siddiqui is one of the greatest victims of the so-called ‘war on terror’ kidnapping program that saw hundreds of innocent people kidnapped and held in U.S.-funded detention around the world,” said Marwa Elbially, the attorney Representing Dr. Aafia. “She has been living this nightmare for over 18 years and was given a ‘death behind bars’ prison sentence during the dark times after September 11th. We call on our government and the government of Pakistan to take action to get her released immediately.”

“A great injustice has been inflicted on Dr. Aafia Siddiqui, an innocent woman who has been imprisoned for nearly two decades as a victim of the War on Terror,” said Sameena Usman, Senior Government Relations Coordinator for CAIR-SFBA. “It is our moral responsibility to work towards her freedom. We call on our congressional members to urge her release.”

“The unjust incarceration of Dr. Siddiqui cannot be atoned for by simply releasing her, but her release would be a step in the right direction by allowing her to be returned back to Pakistan,” said CAIR-MI Executive Director Dawud Walid.