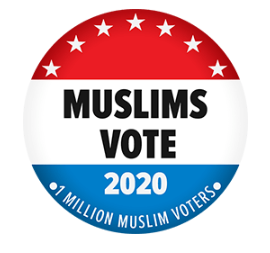 (WASHINGTON, D.C., 7/6/2020) – The Council on American-Islamic Relations (CAIR), the nation’s largest Muslim civil rights and advocacy organization, is urging all eligible Muslim voters in the states of Delaware and New Jersey to safely participate in their respective primaries scheduled to take place tomorrow. Voting by mail where possible is strongly encouraged.

For more information about voting by mail visit CAIR’s new 2020 election website Muslims.Vote and read CAIR’s 50 state guide on voting by mail, which provides information on what to do for the November 3rd General Election.

The guide contains a lists upcoming election dates, whether an excuse is needed to vote absentee and deadlines for requesting and submitting absentee ballots.

Tonight, July 6, CAIR will broadcast night-before-election automated call reminders to registered Muslim voter households in Delaware and New Jersey to get out the vote.

CAIR encourages individuals who plan on voting in person to abide by the recommended precautions for preventing the spread of COVID-19 as outlined by the CDC. These include wearing a mask and practicing social distancing.

If you believe your voting rights have been violated, please contact CAIR at (202) 488-8787 or civilrights@cair.com.