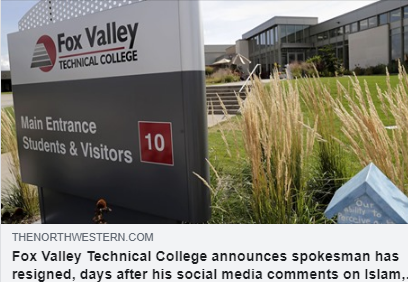 Yesterday, CAIR called for “appropriate disciplinary action” and encouraged the official to directly engage with the Muslim community.

He reportedly called the Black Lives Matter movement “a disgrace” and “get rid of the anti-American filth causing cancer to our nation” on a post about Rep. Ilhan Omar (D-MN), who is a Muslim. Jossart stated: “Islam is all over the world infiltrating every nation, and (Joe) Biden wants their beliefs in our already tainted public school curriculum.” He also called COVID-19 “a hoax from China.”

In a statement, FVTC President Susan May said Jossart resigned effective Monday and was “relieved of his duties immediately.”

“We welcome Mr. Jossart’s acknowledgement of the seriousness of his offensive comments, and we once again encourage him to engage with the Muslim community so that this troubling incident can be turned into an opportunity for growth and learning.”

Washington, D.C.,-based CAIR and the American Muslim community are standing in solidarity with all those challenging anti-Black racism, Islamophobia, anti-Semitism, and white supremacy.