MEDIA ADVISORY: CAIR-DFW to Join Coalition Protest Against Murder of Journalist During 74th Anniversary of the Nakba (Catastrophe) in Downtown Dallas 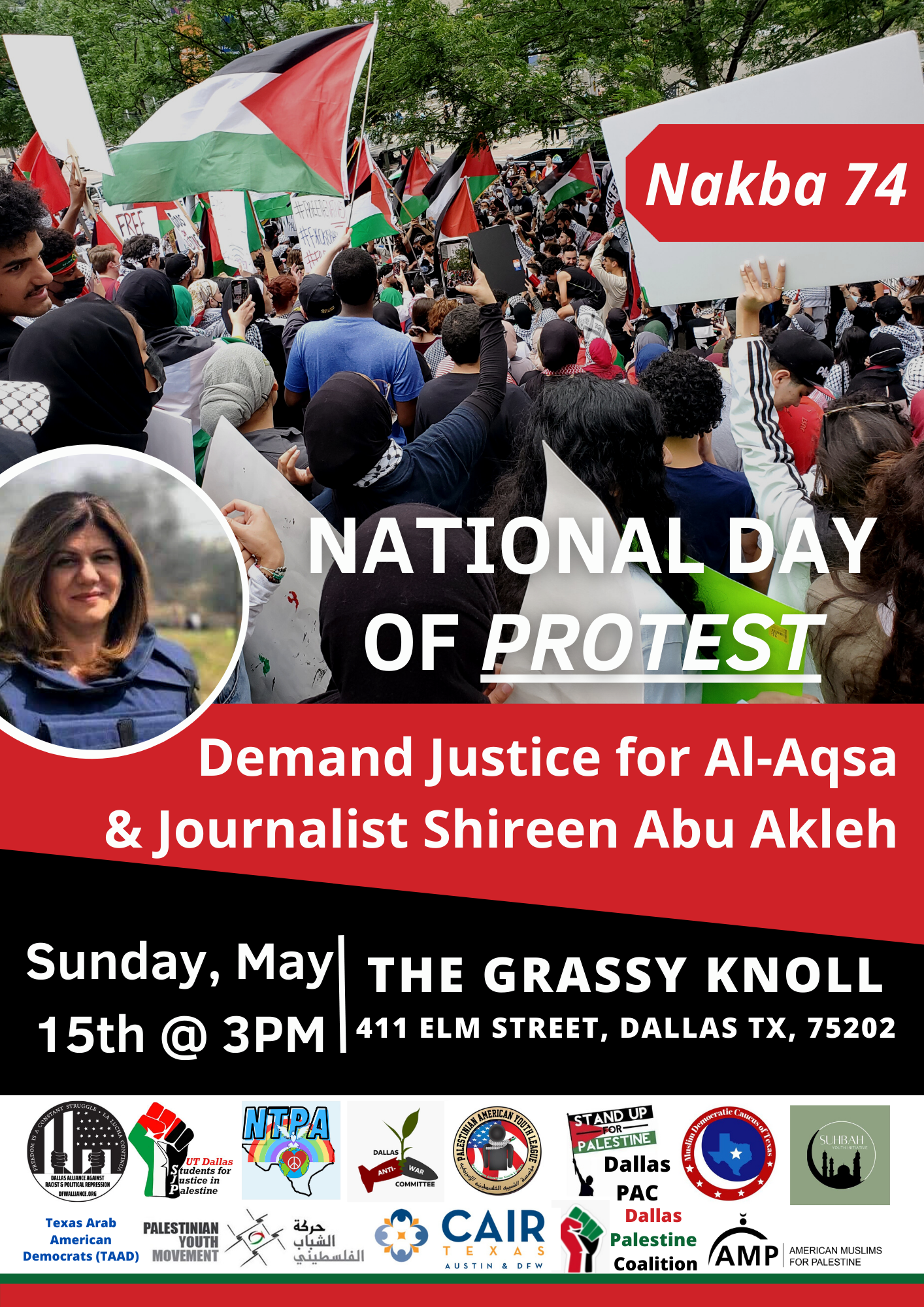 (Dallas, TX, 5/13/2022) – On May 15, the Dallas Fort-Worth chapter of the Council on American-Islamic Relations (CAIR-DFW) will join a large coalition of human rights organizations for a protest in downtown Dallas to call on the Biden administration to hold the State of Israel accountable for the murder of U.S. citizen and journalist Shireen Abu Akleh.

The protest will include speeches from coalition leaders, chants, and a march. Participants are encouraged to bring Palestinian flags, dress in Palestinian colors, and bring water bottles.

[NOTE: The ‘Nakba,’ or catastrophe, refers to the destruction of Palestinian society and homeland in 1948, and the permanent displacement of a majority of the Palestinian people by the state of Israel. It is commemorated on May 15.]

“The deliberate assassination of a journalist for giving a voice to oppressed Palestinians is a crime against humanity and illegal according to international law,” said Faizan Syed, Executive Director of CAIR-DFW. “We call on our government to hold Israel accountable for the murder of a U.S. citizen and journalist, and we will take our call to the streets of Dallas this weekend.”

“Israel has a history of targeting journalists for reporting on the brutal realities of the occupation of Palestine,” said Murjan Altawil, Palestinian Activist and organizer of the protest. “It is imperative that the Biden administration pressure Israel to adhere to international laws and work to end the occupation. During the holy month of Ramadan, Israeli forces regularly targeted Muslim and Christian places of worship, especially in Jerusalem and at Masjid Al-Aqsa.”

Shireen Abu Akleh is a U.S. citizen and a journalist who worked with the Al Jazeera news agency. Ms. Akleh was killed on Wednesday while covering Israeli army raids in the city of Jenin in the occupied West Bank. Ms. Akleh was wearing a press vest and standing with other journalists when she was shot and killed. Another journalist was also shot during the incident.  Recently, during the funeral procession of Ms. Akleh Israeli forces attacked mourners and the pallbearers of her casket.

The protest will include speeches from coalition leaders, chants, and march downtown. Participants are encouraged to bring Palestinian flags, dress in Palestinian colors, and bring water bottles.