Survey of American Muslims Shows Most Have Experienced Increased Anti-Muslim Bigotry Since 9/11 While Community Has Become More Self-Confident, Civically Engaged 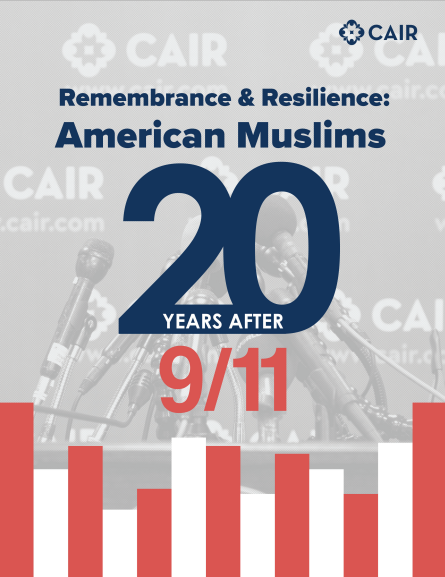 (WASHINGTON, D.C, 9/9/2021) – The Council on American-Islamic Relations (CAIR), the nation’s largest Muslim civil rights and advocacy organization, today released a comprehensive report documenting and analyzing how the aftermath of the September 11th, 2001, attacks changed the American Muslim community over the past 20 years.

The report also includes the results of a CAIR survey of American Muslims showing that a majority of Muslims (69 percent) say they have “personally experienced one or more incidents of anti-Muslim bigotry or discrimination since 9/11.”

CAIR’s report also shows that the vast majority of American Muslims (95%) are likely to speak out when they hear negative comments about Islam and Muslims. Most Muslims (63%) report that their local mosques engaged in more interfaith work in the years since the attack, and most (67%) feel at least somewhat comfortable requesting religious accommodations at work.

CAIR conducted the online survey — which offers insights into the lived experiences of American Muslims years after the September 11, 2001, attacks — from August 12 to September 3, 2021, and received a total of 1,053 completed responses.

“Twenty years after the September 11, 2001, attacks, American Muslims are still working to meet and overcome many of the challenges created by that horrific day,” said CAIR National Executive Director Nihad Awad. “Although most American Muslims report experiencing increased bigotry and discrimination in the years since 9/11, most Muslims are also very confident in standing up for their rights, publicly expressing their faith, and speaking up against bigotry.”

• 63% of American Muslims believe that American media coverage of Muslims has not become more accurate in the years since 9/11.

• 40% of respondents said that they are frequently stopped for extra screening or questioning at airports. This number is on par with the amount of complaints CAIR receives concerning immigration and travel related issues.

• 95% of Muslims said that when they hear negative comments about Islam and Muslims, they always [45%] or sometimes (50%) speak out.

• 47% of Muslims reported feeling comfortable requesting a religious accommodation at school or work. 19% said that they feel somewhat comfortable while 19% do not feel comfortable.

• African American Muslims are more likely to be comfortable requesting a religious accommodation at school or work [58% strongly agree or agree] and more likely to always feel comfortable wearing Islamic religious attire in public [52%] than other ethnic groups in the American Muslim community, including respondents who identify as White, African, Arab, South Asian, etc.

• 63% of Muslims report that their mosques have engaged in increased interfaith work since 9/11.

CAIR recently released a school resource document with tips and educational resources that teachers can use to teach about the 20th anniversary of the September 11, 2001, attacks.