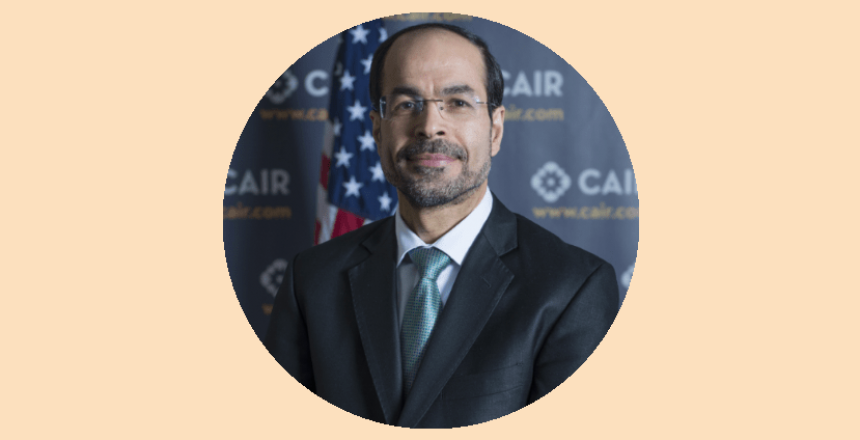 Nihad Awad is the Executive Director and co-founder of the Council on American-Islamic Relations (CAIR), the largest non-profit Muslim civil rights and advocacy organization in the United States.

He has been frequently interviewed on national and international media such as CNN, BBC World Service, PBS, C-SPAN, NPR, The New York Times, The Washington Post, Voice of America and Al-Jazeerah. CAIR news releases are disseminated to hundreds of thousands people worldwide on a daily basis.

After the Oklahoma City bombing in 1995, Mr. Awad flew to Oklahoma to aid in the relief effort. He personally met with Governor Frank Keating and gave the governor a sizable donation for the victims’ fund on behalf of the American Muslim community.

In his professional capacity, Mr. Awad has also personally met with former Secretaries of State Madeleine Albright andColin L. Powell to discuss the needs of the American Muslim community.

Mr. Awad is a regular participant in the U.S. Department of State’s “International Visitors Program”, which welcomes foreign dignitaries, journalists and academics who are currently visiting the President of the United States.

A few days after September 11, 2001, Mr. Awad was one of the few American Muslim leaders invited by the White House to join President Bush in a press conference at the Islamic Center of Washington, the oldest mosque in Washington DC.

Mr. Awad has testified before both houses of the U.S. Congress, most recently at a Senate Judiciary Committee hearing on matters involving Muslims in America.

He has also spoken at prestigious educational institutions, including Harvard, Stanford and Johns Hopkins Universities. He was also a featured speaker at the 2002 Reuters Forum on global cooperation at Columbia University’s Graduate School of Journalism. In addition, he actively works with local and national interfaith leaders and organizations in the interest of promoting positive relations among people of diverse faith communities.