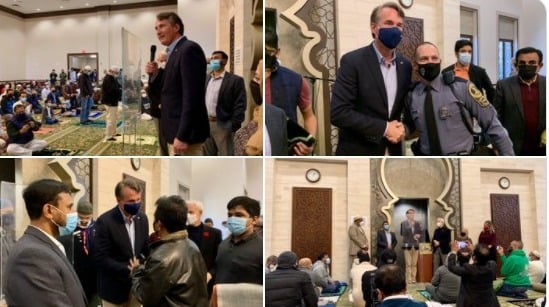 Winning the Virginia governor’s race wasn’t the only shocking thing that Glenn Youngkin did this month.

Just days after his victory, the Republican businessman accepted an invitation to visit a Virginia mosque, sat down with local community members, and highlighted the visit on his own Twitter page.

“It was wonderful to visit the ADAMS Center Mosque this afternoon for lunch and a roundtable,” Youngkin wrote. “Thank you to the congregation for opening up your home of worship to me! I look forward to many more visits over the next four years.”

The incoming governor’s visit with the Virginia Council of Muslim Organizations occurred after he spent his campaign embracing traditional, conservative positions and playing upon white fears of Critical Race Theory (which, for the last time, is not being taught in grade schools).

Yet Youngkin simultaneously deployed a far more moderate persona and tone than typical Trumpist Republicans. The conservative Christian avoided sexist and racist remarks, ran on a ticket with a Black woman and Hispanic man, and combined his dog-whistling on CRT with appeals to racial unity.

It would appear that Youngkin’s relatively restrained conduct on the campaign trail was not just an act. After all, visiting a mosque is nearly an act of blasphemy in the Republican Party of Donald Trump. Yet there Youngkin was in a mosque, taking selfies alongside bearded imams and women wearing hijabs.

Something similarly surprising happened in New Jersey, where Republican truck driver Edward Durr shocked everyone, including himself, by defeating the leader of the state Senate.

After the election, media outlets noticed numerous bigoted tweets Durr had posted online, including virulently anti-Muslim statements dating back to 2016. This was hardly a surprise; what is surprising is how Durr responded to criticism.

Rather than double down, Durr publicly expressed regret, visited a mosque, and met with local Muslim leaders, including the New Jersey chapter of CAIR. During the meeting, Durr apologized for his remarks, condemned Islamophobia, and pledged to encourage unity. With a Quran in hand, Durr said the same to the press.

To be clear, the fact that Glenn Youngkin and Edward Durr treated their Muslim constituents with a modicum of respect is basic behavior we should expect of every politician. Politicians do not deserve praise for doing what they should be doing in the first place.

Furthermore, their conduct doesn’t signal a broader pattern of change among elected Republican officials, who are still mostly openly hostile to Muslims.

Yet the way local Muslims have dealt with Governor-Elect Youngkin and Senator-Elect Durr do serve as a reminder of an important teaching from the Quran: “Good and evil cannot be equal; respond with something better, and then the person who was your enemy will become like a close friend.”

Instead of writing Edward Durr off as a lost cause when his anti-Muslim tweets surfaced, New Jersey Muslims reached out and gave him an opportunity to make amends.

Instead of assuming that Glenn Youngkin would continue the anti-Muslim pattern of Donald Trump, Virginia Muslims reached out and invited him to a mosque.

Muslim voters around the rest of the country should keep this strategy in mind as we deal with elected officials who might offend us or disagree with us on many issues.

We can and should build relationships with any elected officials who are willing to behave respectfully. We can and should collaborate on issues of common concern while aggressively standing against them when we disagree–like Glenn Youngkin’s nonsense regarding Critical Race Theory.

That’s why the US Council of Muslim Organizations, the largest umbrella organization for Muslim groups in the United States, arranges for visits with all members of the House and Senate–regardless of party–during its annual Muslim Hill Day. Muslim Americans meet with everyone from staffers for Ted Cruz to staffers for Nancy Pelosi because our community cannot afford to be dependent upon, beholden to or taken for granted by any political party.

After all, the Democratic Party is not immune to the disease of anti-Muslim bigotry that has consumed the Republican Party.

Although President Biden repealed the Muslim Ban and appointed Muslim Americans to several positions, his administration is actively implementing or defending other policies harmful to Muslims here and abroad–defending systemically anti-Muslim government policies in court, funding dictators in the Arab Muslim world, and enabling Israeli violence against Palestinians.

Just last week, the White House went before the Supreme Court to argue against a lawsuit filed by California Muslims against the FBI for illegally spying on and attempting to entrap the local Muslim community. The government is also defending the watchlist and n0-fly list from lawsuits by negatively impacted Muslims.

The Biden Administration is also attempting to extradite and prosecute Julian Assange for whatever role he played in helping Private Manning expose American war crimes committed during the Iraq War.

Meanwhile, Democrats in Congress have repeatedly thrown Ilhan Omar and Rashida Tlaib under the bus while failing to advance issues important to Muslim Americans, such as police reform, voting rights and the NO Ban Act.

Even the College Democrats of America (CDA) has faced criticism for fostering an atmosphere of anti-Muslim bigotry. Nourhan Mesbah, the newly elected Muslim vice president of the CDA, was smeared as a “jihadist” by elected officers of the organization.

Point being, Muslims engaged in politics must demand better from both political parties, work with any elected officials who behave reasonably, and maintain our independence along the way.

Virginia and New Jersey are a good place to start.

Edward Ahmed Mitchell is a civil rights attorney who serves as the national deputy director of the Council on American-Islamic Relations.