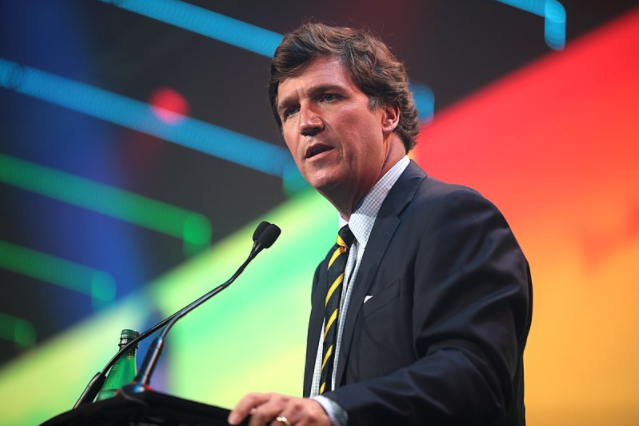 What does Fox News host Tucker Carlson now have in common with the Norwegian mass shooter Anders Breivik, the Australian mass shooter Brenton Tarrant and the Tree of Life Synagogue mass shooter Robert Bowers? He, too, embraces the “great replacement theory.”

Just minutes before Breivik parked a van filled with explosives outside of Norway’s government headquarters on July 22, 2011, he published a manifesto online. The diatribe explained why the white supremacist would go on to detonate that bomb and then attack a youth camp for budding political activists, murdering 77 people.

Breivik, a failed cellphone salesman who lived alone with his mother and subsisted on credit card debt, was convinced that liberal politicians were the ones ruining Norway’s society by welcoming Muslim immigrants.

The “great replacement theory” that Breivik cited has been embraced by other xenophobic and Islamophobic mass murderers – including Tarrant, who slaughtered 51 Muslims at two mosques in Christchurch, New Zealand, after publishing a manifesto that was literally titled “The Great Replacement.”

Unfortunately, racists spewing hatred in the dark corners of the internet aren’t the only ones who tout this theory. People with far more power do so. Look no further than Tucker Carlson.

Several months ago the television personality claimed that Democrats were trying to “replace the current electorate” with “more obedient voters from the Third World.” In response to public outrage and demands for his termination, Fox News defended Carlson and claimed that he had actually somehow “decried and rejected replacement theory.”

But last week Carlson left no doubt about what he believes.

After playing a deceptively edited 2015 clip of then-Vice President Joe Biden discussing America’s long history of benefiting from immigration, Carlson said: “An unrelenting stream of immigration. But why? Well, Joe Biden just said it, to change the racial mix of the country. That’s the reason, to reduce the political power of people whose ancestors lived here, and dramatically increase the proportion of Americans newly arrived from the Third World . . . “

Carlson added: “It’s horrifying. But there’s a reason Biden said it. In political terms, this policy is called the great replacement, the replacement of legacy Americans with more obedient people from far-away countries.”

What Tucker Carlson told his 3 million viewers is as factually inaccurate as what Breivik and Tarrant wrote in their manifestos. In reality the Biden administration has warned migrants against coming to the border – and it has just deported thousands of Haitian refugees who did so. The Obama administration also set a record for deportations while failing to pass comprehensive immigration reform. If liberals are plotting a “great replacement,” they’re doing a terrible job of it.

The problem with Carlson’s claims is that they are not merely delusional; they are dangerous. Even deadly.

When you tell white Americans that their government is actively plotting to dilute their voting power by welcoming, housing and enriching dangerous immigrants who want to destroy America’s way of life, you are setting the stage for bloodshed. All it takes for violence to erupt is just one Tucker Carlson viewer deciding to “take matters into his own hands.”

We see such violence regularly, and not just overseas in places like New Zealand and Norway. Robert Bowers, the white nationalist who opened fire on the Tree of Life Synagogue in Pittsburgh, wanted to murder Jews at that particular synagogue because some of the worshippers had openly advocated for refugees.

“I can’t sit by and watch my people get slaughtered,” Bowers wrote before the shooting. He also once said, “Diversity means chasing down the last white person.”

This is why my civil rights organization, the Council on American-Islamic Relations (CAIR), has called on Fox News to fire Tucker Carlson. Not because he’s a conservative. Not because he’s paranoid. Not because he lies. Fox should fire him because his lies are dangerous – and especially to Latinos, Jews and the Muslim community.

The truth is that everyone living in our nation today – except for indigenous people – is here because they or their ancestors came from somewhere else in recent centuries. America does not belong to any racial group, nor does greater diversity harm any racial group. Diversity is not a threat. It’s a gift from God.

The very Quran that white nationalists hate so much says, “And of [God’s] signs is the creation of the heavens and the earth and the diversity of your languages and your colors. Indeed, in that are signs for those of knowledge.”

When a country welcomes immigrants and embraces diversity, that’s a good thing for everyone. If Tucker Carlson believes otherwise, he can rant about the great replacement theory in a dark corner of the internet with other white supremacists. But he should not be able to do so on a national television network that is viewed by millions of impressionable people.

America cannot afford more deadly conspiracy theories. Neither can the rest of the world.

Edward Ahmed Mitchell is a civil rights attorney who serves as the national deputy director of the Council on American-Islamic Relations.