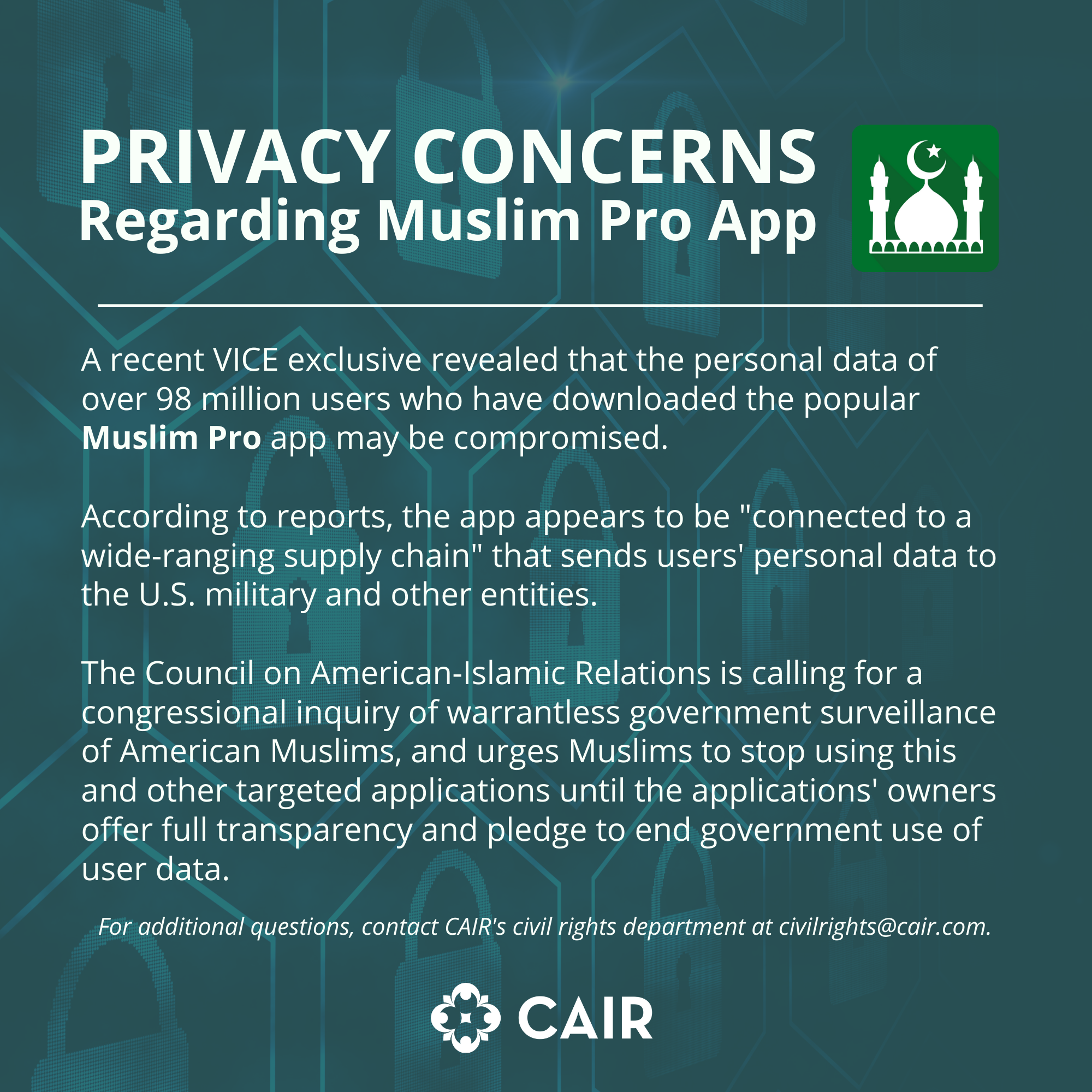 (WASHINGTON, DC – 11/16/2020) The Council on American-Islamic Relations, the nation’s largest Muslim civil rights and advocacy organization, today strongly condemned the government’s reported use of personal data from popular Muslim religious applications to target Muslims around the world, called for a congressional inquiry into the possible warrantless surveillance of American Muslims, and warned the Muslim community to stop using the targeted applications.

“We call upon Congress to conduct a thorough public inquiry into the government’s use of personal data to target the Muslim community here and abroad, including whether this data was used to illegally spy upon target Muslim Americans,” said CAIR National Executive Director Nihad Awad. “We also encourage Muslim Americans to stop using these applications unless and until the companies thoroughly explain and fully end use of their data by government agencies.”

CAIR is urging all Americans concerned about privacy rights to contact their elected officials in Congress to demand that they address this newest revelation of possible warrantless government spying by the U.S. government.

“For years, many Muslim Americans have experienced spying, profiling and other forms of government discrimination here at home, while far too many Muslim civilians overseas have been killed in drone strikes and other disastrous military operations,” said CAIR National Deputy Director Edward Ahmed Mitchell. “The notion that our government might be using popular religious applications to engage in such conduct simply adds insult to injury. All of it must end. Now.”

According to Vice, U.S. Special Operations Command (USSOCOM), a branch of the military, responsible for “counterterrorism, counterinsurgency, and special reconnaissance” obtained access to movement data of Muslims using the apps to assist on overseas special forces operations.

Ordinarily, the government would need a warrant to secure such information if it was not available for purchase. CAIR questions the legality of the U.S. government’s purchase of private data on the movements of these apps’ users, which include Americans. An estimated 98 million users have downloaded Muslim Pro on Apple and Google Play enabled devices.

In a statement provided to Vice, Navy Commander Tim Hawkins, a USSOCOM spokesperson, confirmed the purchase of Muslim app location data and added that: “Our access to the software is used to support Special Operations Forces mission requirements overseas. We strictly adhere to established procedures and policies for protecting the privacy, civil liberties, constitutional and legal rights of American citizens.”

However, CAIR believes a full congressional inquiry and hearing is required to explore one of the first documented cases of the U.S. military purchasing the movement and location data of Muslim app users – including American Muslims – for possible military strikes overseas.