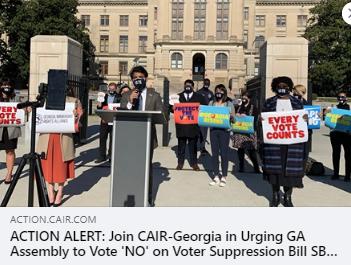 (ATLANTA, GA, 3/24/21) – The Georgia office of the Council on American-Islamic Relations (CAIR-Georgia) is calling on all Georgians to contact their elected officials in the Georgia House of Representatives to urge that they “VOTE NO” on voter suppression bill SB 202, sponsored by Republican State Representative and Chairman of the Special Committee on Election Integrity Barry Fleming.

TAKE ACTION: URGE YOUR ELECTED MEMBERS IN THE GEORGIA GENERAL ASSEMBLY TO VOTE NO ON VOTER SUPPRESSION BILL SB 202

According to CAIR-Georgia’s friends and allies at Fair Fight:

“SB 202 was released only an hour before a hearing in Barry Fleming’s Special Committee on Election Integrity – leaving advocates, legislators and voters with no time to read or analyze it. Its provisions would restrict weekend voting, criminalize line warming, add new ID requirements to vote by mail, allow legislative takeovers of local boards of elections, and much more.

“With SB 202 we are seeing Georgia’s top legislative leaders trying to make it easier to not certify elections in which they do not like the results. If business leaders allow these takeover attempts to pass Georgia’s legislature, we are looking at our state democracy coming to a complete halt in 2022.”

SB 202 IS THE WORST ANTI-VOTING BILL IN GEORGIA. HERE’S HOW:

SB 202 is detrimental to absentee voting:

• Cuts down the period to apply and return mail ballots

• Adds new ID requirements that risk identity theft and place a burden on over 200,000 Georgians

SB 202 is detrimental to drop boxes:

• Mandates that drop boxes ONLY be available during early voting hours

• By adding new ID requirements to mail ballot requests and ballots, voters are at an increased risk of identity theft

“SB 202 is a bill that, among many other voting restrictions, allows the state takeover of county elections, dramatically restricts absentee mail-in voting and makes runoff elections virtually impossible to administer by reducing them to 28 days. This bill is nothing but an effort to diminish the power of the Georgia voter, primarily the Black Georgia voter. If passed, it will be a stain on the pages of our American democracy,” said CAIR-Georgia Government Affairs Director Kareem El-Hosseiny.

“Chairman Barry Fleming’s insidious attack on our voting electorate by disenfranchising Black and other minority voters from within ‘the people’s house’ is a brazen exploitation of his chairmanship of the Special Committee on Election Integrity,” said CAIR Georgia Legal & Policy Director Murtaza Khwaja. “Fleming’s amateur-hour Jim Crow act, in unilaterally ramming through a ninety-three-page substitute to a two-page bill without input from voter advocacy groups, the citizens of Georgia, or a bi-partisan collection of legislators, must be roundly rejected and his chairmanship revoked.”

Khwaja added that SB 202 is nothing more than a blatant attempt by Chairman Fleming to put a thumb on the scale, not out of concern for election integrity or for increasing access to the ballot for all eligible Georgians, but to influence all future Georgia elections.