ACTION ALERT: Join CAIR in Urging U.S. Senate to Pass the George Floyd Justice in Policing Act Before the Anniversary of His Murder (May 25) 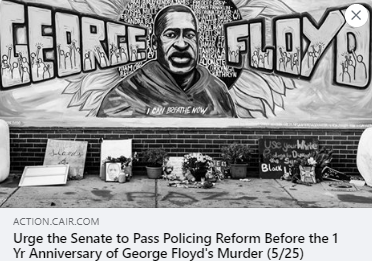 (WASHINGTON, D.C., 5/10/21) – The Council on American-Islamic Relations (CAIR), the nation’s largest Muslim civil rights and advocacy organization, is calling on all Americans to urge their U.S. senators to pass the George Floyd Justice in Policing Act (H.R. 1280) in a bipartisan manner before the March 25, the one-year anniversary of his murder by Minneapolis Police Department officers.

“CAIR continues its call on the U.S. Senate to adopt the George Floyd Justice in Policing Act before the one-year anniversary of his murder by Minneapolis Police Department officers,” said CAIR Director of Government Affairs Department Robert S. McCaw. “Congress must stand with the Black Lives Matter protesters and honor the many Black victims who have lost their lives to racist police violence. Republican and Democratic lawmakers should not be divided on the issue of qualified immunity, but instead empower Americans to sue the police and other government officials who abuse their authority and violate the civil rights of minorities.”

Adopted on March 3 in the U.S. House of Representatives mainly along Democratic and Republican party lines by a vote of 220 to 212, the George Floyd Justice in Policing Act would hold law enforcement accountable for misconduct in court, improve transparency through data collection, and reform police training and policies.

While no one congressional reform package can ever fully address the systemic problem of police killings, violence, and profiling targeting Black Americans and other minority communities, CAIR views the Justice in Policing Act as a good first step.

Since then, there have been reports in the media that those same lawmakers hope “present a bipartisan policing reform bill by May 25.”

Civil rights activists remained concerned about how much compromise is needed to present a bipartisan policing bill the Democrats and Republicans can agree on. On Sunday, House Majority Whip James Clyburn (D-SC) said on CNN’s “State of the Union,” he was willing to compromise on qualified immunity to pass a policing reform bill with Congress having to “come back and try to get it later.”

Last year, CAIR marked the one-month anniversary of George Floyd’s murder by unveiling a Black Lives Matter banner in his honor on the outside of CAIR’s Capitol Hill headquarters in Washington, D.C. – blocks away from the Capitol and the congressional office buildings – that urged Congress to pass the George Floyd Justice in Policing Act.