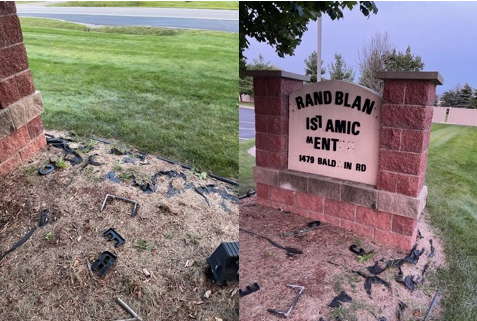 (CANTON, MI, 9/12/2021) – TheMichigan chapter of the Council on American-Islamic Relations (CAIR-MI), the nation’s largest Muslim civil rights and advocacy organization, today called on state and federal law enforcement authorities to investigate a possible bias motive for the vandalism of the entrance sign and periphery lighting of an Islamic Center on the 20th anniversary of the September 11, 2001, attacks.

Officials of the Grand Blanc Islamic Center yesterday found the sign at the entrance of the center defaced along with periphery lights that were destroyed.  Local law enforcement has been contacted about the incident.

“We call on local, state and federal law enforcement authorities to rigorously investigate a possible bias motive for this 9/11 anniversary vandalism and to bring hate crime charges if that hate motive is indicated,” said CAIR-Michigan Executive Director Dawud Walid. “It is shameful that a person or persons would vandalize a house of worship on the day on which our nation is reflecting on the national tragedy of our generation and the repercussions that followed.”

Walid added that CAIR-MI is offering a $1,000 reward for any information provided which leads to an arrest and conviction relating to this incident.

He noted that earlier today, CAIR-MI called on Wayne County authorities to charge a women who allegedly assaulted an African-American Muslim woman on Spirit Airlines with a hate crime under Michigan’s Ethnic Intimidation Statute.

CAIR-Austin yesterday also reported an act of hateful intimidation against the Muslim community in Austin, Texas in which a pig’s head mask and anti-Muslim sign were left at a local Islamic center and school.