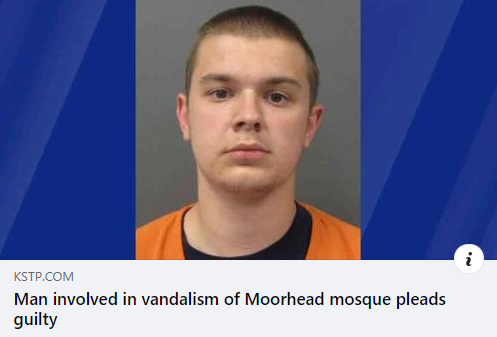 (MINNEAPOLIS, MN, 7/30/21) – The Minnesota chapter of the Council on American-Islamic Relations (CAIR-MN) today called on the FBI to investigate a potential threat to a Moorhead mosque after learning that a man sentenced today for the hate vandalism of that house of worship was affiliated with a hate group.

Benjamin Stewart Enderle, 22, entered a guilty plea on July 2 for vandalizing the Moorhead-Fargo Islamic Community Center with a Nazi swastika and phrases such as “Death to Islam.”

“We thank the Moorhead-Fargo Islamic Community Center for its willingness to forgive the perpetrator of this act of hate in an effort to change the course of his life for the better,” said CAIR-MN Executive Director Jaylani Hussein. “After learning that Benjamin Stewart Enderle was allegedly working with accomplices in a hate group who possess an arsenal of weapons, we urge the FBI to investigate potential threats these individuals may pose to the local Muslim community.”