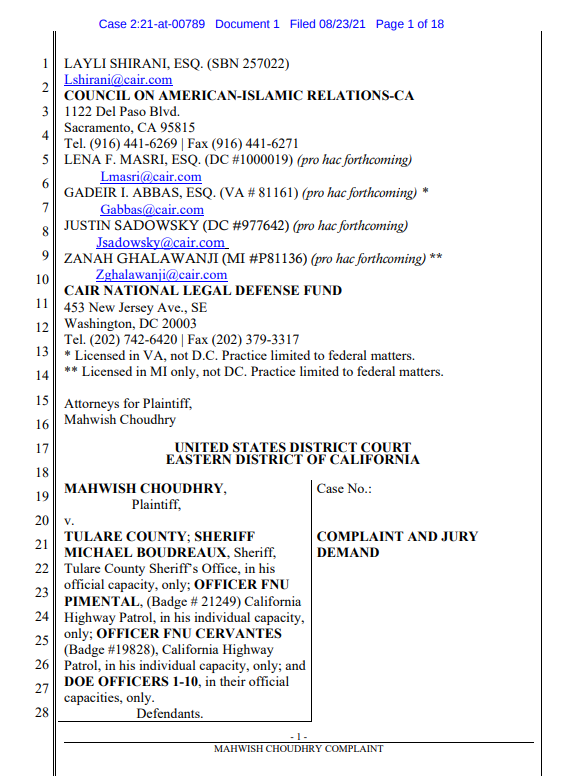 CHP officers stopped Choudhry for speeding when she was traveling with her two children and a friend to National Sequoia Park to celebrate Eid, one of the holiest days for Muslims. Officers arrested and transported Choudhry to Tulare Pre-Trial Booking Facility where they forcibly removed her hijab, took her booking photo and forced her to remain without her hijab for the duration of her detention and while in the presence of males. (NOTE: Muslim women wear hijab in the presence of males not part of their immediate family).

“Inmates who practice a religion that requires particular modes of dress, garments, headgear, etc., other than standard-issue clothing, should generally be accommodated subject to the need to identify inmates and maintain security. … Personal head coverings should be exchanged in favor of office-supplied head coverings when available and appropriate. Inmates wearing headscarves or other approved coverings shall not be required to remove them while in the presence of or while visible to the opposite sex, if they so desire.” – Tulare County Sheriff Department’s Office Policy 1013:11

Staff members ignored Choudhry’s pleas to allow her to cover and photographed her even though her California Driver’s License shows Choudhry wearing hijab. Officers also denied Choudhry’s request to cover her hair with her hoodie while in a holding cell.

Choudhry brings her case under four counts of violations against the defendants for violations of the First and Fourth Amendments of the U.S. Constitution, the Religious Land Use and Institutionalized Persons Act (RLUIPA), Section 1983 of the US Code, Section 4 of the California Constitution and the California Tom Bane Act.

“What struck me about this traumatic event for Mahwish was the amount of malice that was revealed,” said CAIR-SVCC Attorney Layli Shirani. “There is no law enforcement objective in depriving her of her hijab once she has been searched and is confined to a cell. Unless, of course, humiliation is a law enforcement objective. She was not even permitted to wear her hijab when she was being released – not until she had left the building.”

“The government has no legitimate interest in forcing Muslims to take their hijab off for identification photographs,” said CAIR-LDF Attorney Justin Sadowsky. “In California and elsewhere, hijabs remain on when taking driver’s license ID photos. Cruelty for the sake of cruelty by law enforcement must end, especially when that cruelty strikes at our religious freedoms.”