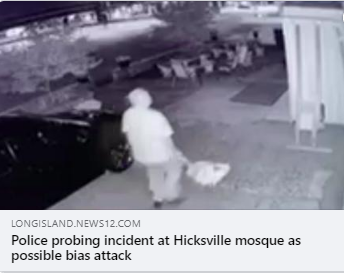 Law enforcement authorities are looking for a man who threw urine and garbage on the front door of the Faizan-e-Aisha mosque in Hicksville, N.Y.

Surveillance video shows a man walk up to the front door of the mosque and toss shovels of garbage and urine on the door. While the vandalism reportedly occurred Aug. 13, it was not reported until Thursday because the same man allegedly returned and threatened people who came to pray at the mosque. The incident is being investigated as a possible hate crime.

“This type of apparently bias-motivated attack on a house of worship is absolutely unacceptable and should be condemned by political and religious leaders of all backgrounds. As we approach the anniversary of the September 11, 2001, attacks, we must all stress national unity and mutual understanding, not division and hatred.”

She noted that earlier this month, CAIR-NY condemned hate vandalism of a Long Island Sikh temple and a hate attack against a 13-year-old Sikh boy, which also occurred on Long Island.

SEE: CAIR-NY Condemns 3rd in Series of Anti-Muslim Hate Crimes in Queens, Urges Anyone with Info to Call Police

In its latest mid-year report, CAIR found that anti-Muslim hate crimes have increased this year.