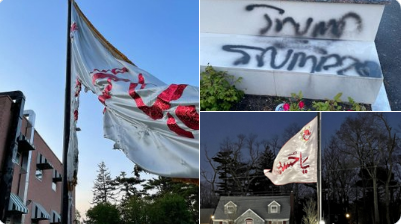 (NEW YORK, NY, 5/19/2021) — The New York chapter of the Council on American-Islamic Relations (CAIR-NY) condemned a pro-Trump vandalism of a mosque in Suffolk County.

At 2 a.m. on May 18, two individuals reportedly entered the Shah-E-Najaf mosque, a center operated by the Jafria Association of North America, by cutting open a fence guarding the center. The perpetrators allegedly vandalized the mosque with pro-Trump graffiti and burned the Alam, a red and white flag that symbolizes peace and justice in the Shia faith tradition. The Alam has been replaced, but the graffiti remains on the mosque property. Suffolk County Police say they are investigating the incident as a hate crime.

“A bias-motivated attack on any place of worship is abhorrent and must be condemned by local and state officials. The burning of a religious artifact, the Alam, and the pro-Trump, white supremacist graffiti is disgusting. This hate crime must be swiftly investigated and the suspects brought to justice.

“This is the fourth hate crime targeting Shah-E-Najaf mosque since 2007. Elected officials need to do more for this community than offer words of support. We urge local and state officials to identify resources and programs that can help the mosque and its congregants have a safe and secure place of worship and more police cannot be the answer. This pattern of hate must come to an end.”

This mosque defacement comes after the vandalism of a mosque in Brooklyn last week where “Death 2 Palestine” was found and an attempted stabbing at a mosque in Virginia.