CAIR Action Alert: Boycott Israeli Dates, Many of Which Are Grown and Packaged in Illegal Settlements 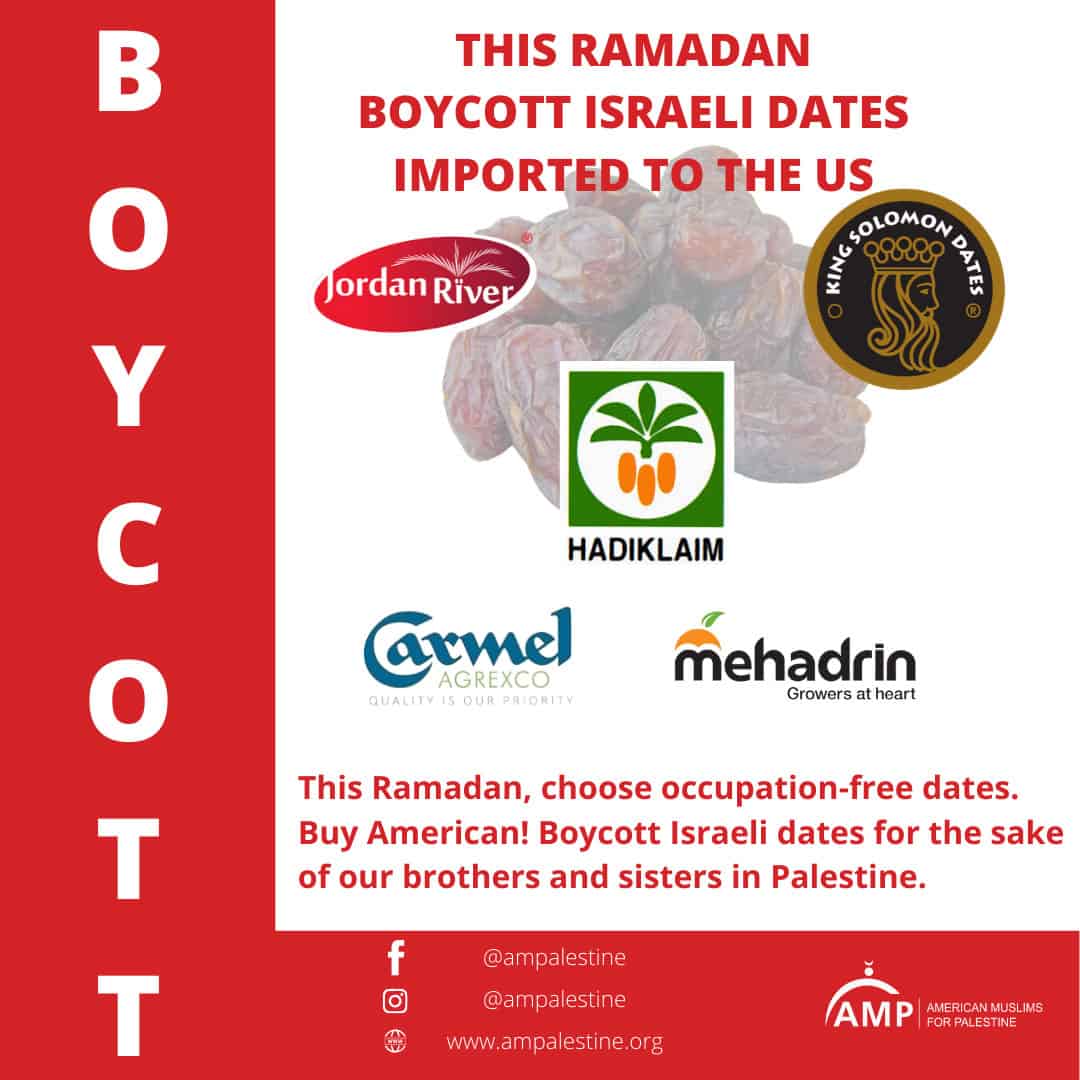 (WASHINGTON, D.C., 4/17/20) – The Council on American-Islamic Relations (CAIR), the nation’s largest Muslim civil rights and advocacy organization, is calling on all Americans to join American Muslims for Palestine’s (AMP) campaign this Ramadan and beyond to boycott Israeli dates, many of which are grown and packaged in illegal Israeli settlements on Palestinian land.

AMP initiated the first-ever nationwide boycott of dates produced in Israeli settlements during Ramadan 2012 by urging grocery store owners to remove Israeli dates from their shelves. Since then, AMP has distributed tens of thousands of postcards and brochures to stores, mosques, and communities nationwide.

“CAIR affirms the First Amendment right of Americans to engage in boycotts in pursuit of civil and human rights at home and abroad. Throughout our nation’s history, Americans have engaged in many important morally driven boycotts, including the Boston Tea Party and the boycott of apartheid South Africa. The American-led boycott of Israeli dates,many of which are grown and packaged in illegal Israeli settlements, is a continuation of our great nation’s proud tradition of waging economic boycotts to protest injustice,” said CAIR National Executive Director Nihad Awad.

Since 2016, the volume of Israeli dates being imported to the US has dropped from 23 million pounds to 7 million pounds (2018-2019 market year) annually, according to data from the Economic Research Service of the US Department of Agriculture. This is due to the powerful consumer boycott of Israeli dates that distributors, store owners, and consumers have participated in over the last few years.

With Ramadan approaching, CAIR is standing in solidarity with AMP and other advocacy groups to relaunch the date boycott campaign and is urging all Americans who oppose illegal profiteering from stolen Palestinian land to take action today.

TAKE ACTION BY VISITING AMP’s new and improved campaign site, where you can:

1. Watch a new video about the Israeli date industry’s exploitation of Palestinian land and labor and share it on social media to raise awareness.

2. Sign AMP’s petition to join in solidarity with this boycott of Israeli dates to support justice for the Palestinian people.

3. Download sample letters and posters you can share with store owners to encourage them to join the boycott.

4. Learn more about the boycott campaign and the exploitative Israeli date industry by downloading the new fact sheet.

5. Find alternative date companies that you can buy from.

Israel still produces about 181 million pounds of dates annually, according to data from the UN Food and Agriculture Organization. It is now well-documented that the settlement enterprise is benefiting tremendously from dates grown on stolen Palestinian land in the Jordan Valley using exploited Palestinian labor.

This Ramadan, CAIR and AMP calls on all Americans to use their purchasing power to buy dates grown domestically in California and dates imported from Arab and Muslim-majority countries.

American Muslims for Palestine firmly believes that educating the American public is key to bringing about change in the Middle East.