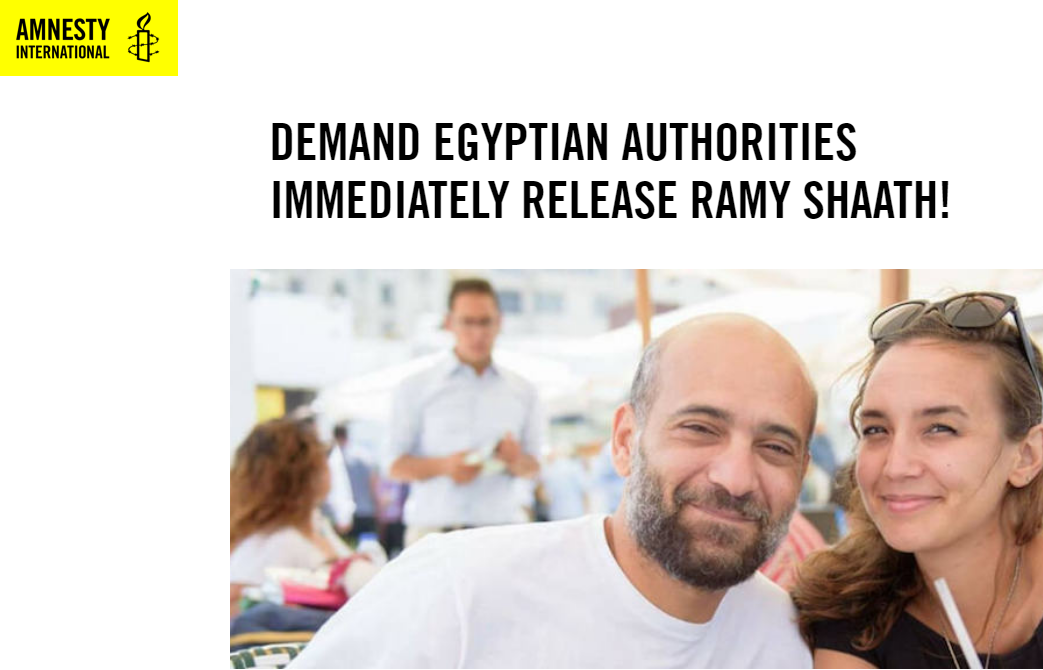 Join CAIR in signing the petition to free a human rights activist who is wrongly imprisoned by a brutal and dictatorial regime. More than 40,000 supporters worldwide have signed on–if you sign and share this petition with 3 friends, we could easily reach our goal of 100,000 signatures.

According to Amnesty International, Ramy Shaath is an Egyptian-Palestinian political activist and human rights defender, unjustly imprisoned for over 600 days at the Tora prison in Egypt for his peaceful political activities without a chance to defend himself. Son of the late Egyptian activist Safaa Zeytoun and former Palestinian Minister of Foreign Affairs Nabil Shaath, Ramy has been politically active all his life. He played a key role during the Egyptian revolution and he co-founded the BDS movement in Egypt.

Because of his political activism, on the night of July 5, 2019, Ramy was arrested from his home in Cairo and in front of his wife Céline, solely for peacefully exercising his rights to freedom of expression and participation in public affairs. Céline was forcibly deported to France that same night.

Since then, Ramy’s pre-trial detention has been extended almost two dozen times, culminating in months of unlawful imprisonment, without adequate access to legal counsel and medical care. In April 2020, in an attempt to justify this injustice, Egyptian authorities wrongfully added him to their so-called “terrorist list,” a decision that was made without his presence, without his lawyers, without his right to due process, and without a shred of evidence. He has been actively defending others all his life and needs us to defend him now.

His wife Céline has been tirelessly working on a grassroots campaign to free him for over 600 days and her effort has not gone unnoticed–Ramy’s case has received heightened attention from across the world. From 56 US Representatives and Senators joining 220 EU lawmakers in an open letter to Sisi, to the UN working group issuing an opinion for his release, the public pressure and global support is putting pressure on the Egyptian government to free Ramy Shaath.

Ramy’s family and supporters will not stop fighting until Ramy is safe, healthy, and free. But they need our help. CAIR is joining this fight because no matter what country a person resides in, they should be afforded their due process rights. Will you sign onto the global petition today?

The grassroots campaign has proven that mass global and public pressure works; your signature could really make a difference. Help us free Ramy Shaath by signing the petition now.  Together, in solidarity, we can act for justice.