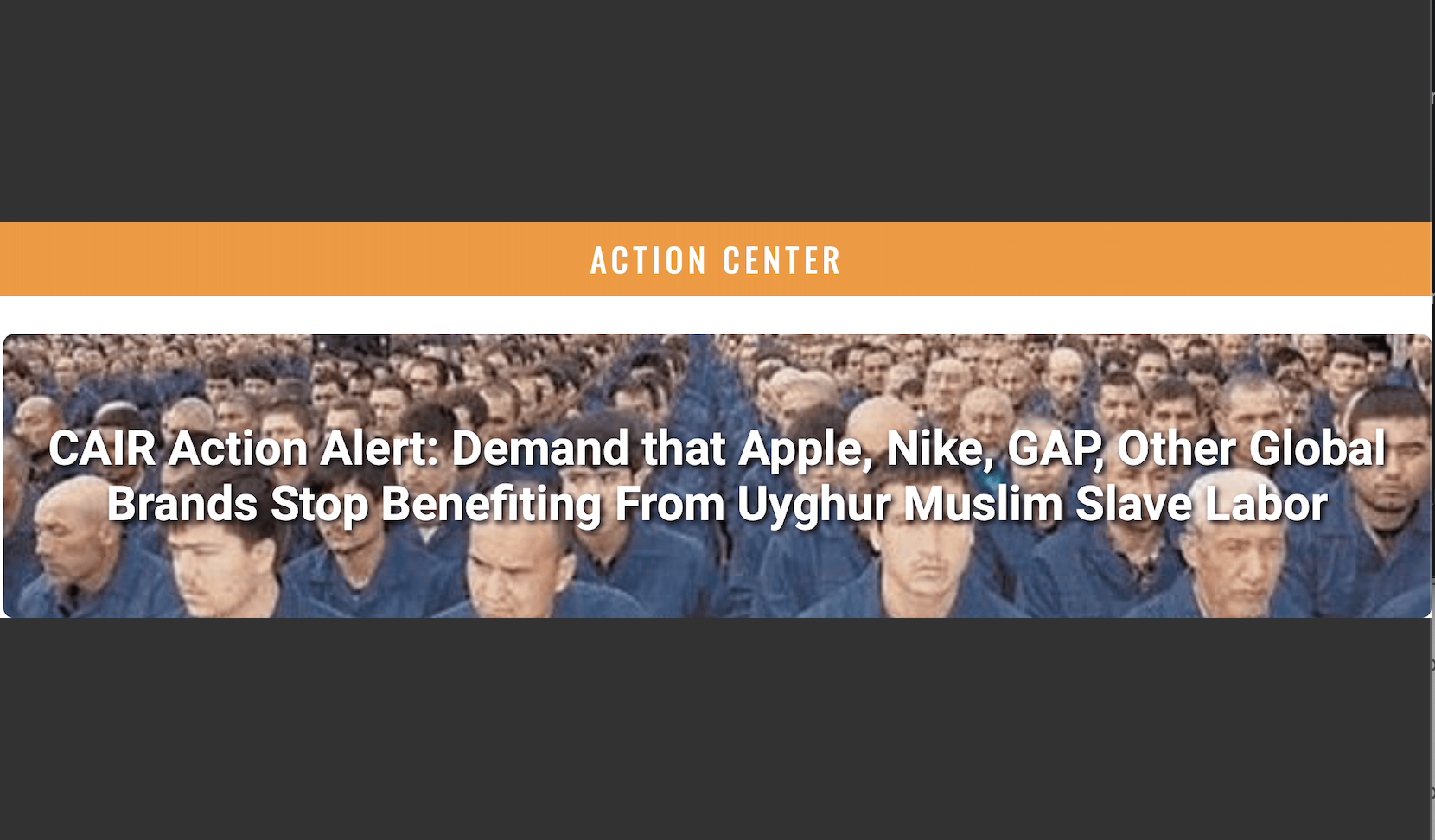 (WASHINGTON, D.C., 3/6/20) – The Council on American-Islamic Relations, the nation’s largest Muslim civil rights and advocacy organization, is calling on all Americans to demand that Apple, Nike, GAP, and other popular global brands stop benefiting from Uyghur Muslim slave labor.

A new report by the U.S. State Department, and funded by the Australian Strategic Policy Institute, found that between 2017 and 2019 the Chinese government forcibly transferred at least 80,000 Uyghur Muslims – then imprisoned in state run concentration camps for being Muslim – to work in factories across China that supply popular global brands.

“Popular global brands like Apple, Adidas, BMW, Gap, Huawei, Nike, Mercedes-Benz, Puma, Samsung, Sony, and Volkswagen have profited from Uyghur Muslim slave labor and now they have the legal and moral responsibility to account for this injustice and put an immediate stop to it.

“Whether or not these corporations knew they were benefiting from China’s abuses – they still chose to do business inside that country while it was illegally imprisoning more than one million Uyghur Muslims in concentration camps for no other reason than practicing their faith.

“Until these popular global brands can recertify that they are no long profiting from Uyghur Muslim slave labor – and condemn China for its actions – consumers should refrain from buying their products.”

“I stand with the Council on American-Islamic Relations (CAIR), the United States’ largest Muslim civil rights and advocacy organization, in calling on your company and other popular global brands to recertify that you are no longer profiting from Uyghur Muslim slave labor in China.

“Whether or not your company knew it was benefiting from China’s abuses – you still chose to do business inside a country that is illegally imprisoning more than one million Uyghur Muslims in concentration camps for no other reason than practicing their faith.

“Until your company is able to speak out against the treatment of Uyghur Muslims in China and recertify that you are no long profiting from Uyghur Muslim slave labor – I will refrain from buying your products.”

In November, The New York Times published more than 400 pages of leaked Chinese government documents detailing the mass detention of Uyghurs, Kazakhs and others Muslims in concentration camps in the Xinjiang region.

Dubbed the “Xinjiang Papers” by the New York Times, more than 400 pages of leaked Chinese government documents reveal classified directives and private speeches by leaders of that country on the mass detention of Uyghur Muslims in the Xinjiang region.

Included in the leaked files are quotes by Chinese President Xi Jinping to government officials instructing them to use the “organs of dictatorship” to show “absolutely no mercy” to Uyghur Muslims in Xinjiang region as part of China’s “struggle against terrorism, infiltration and separatism.” The Chinese Communist Party boss for the region, Chen Quanguo, is also shown instructing officials to “round up everyone who should be rounded up.”

Uyghur Muslim concentration camp detainees report being forced to listen to lectures, learn Mandarin, sing songs praising the Chinese Communist Party, and being coerced into abandoning their faith. Some inmates are forced to eat pork and drink alcohol, both forbidden activities in Islam. Some are tortured. Muslim women detainees have reported being sexually assaulted, raped, forcefully sterilized, and made to have abortions in Chinese detention facilities.

In October, CAIR condemned the NBA for silencing Houston Rockets General Manager Daryl Morey over his support for pro-democracy protests in Hong Kong and for the league’s continued operation of a training academy in Xinjiang.

CAIR also welcomed visa restrictions on Chinese government and Communist Party officials believed to be responsible for, or complicit in, the detention of Uyghurs, Kazakhs and other minority groups in China’s Xinjiang region.