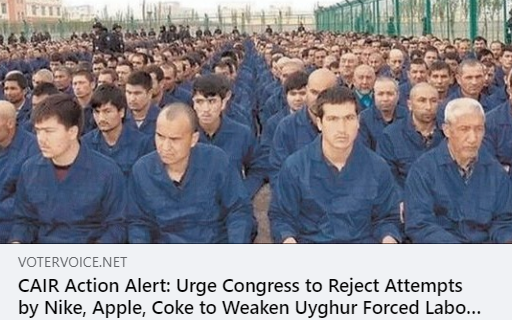 (WASHINGTON, D.C., 12/1/2020) – The Council on American-Islamic Relations (CAIR), the nation’s largest Muslim civil rights and advocacy organization, is a calling on all Americans to urge their members of Congress to reject alleged attempts by Nike, Apple, Coca-Cola (Coke), the U.S. Chamber of Commerce, and other business interests to weaken forced labor legislation that cracks down on imports of goods made with Uyghur Muslim slave labor in China’s Xinjiang region.

On November 29, the New York Times published the article “Nike and Coca-Cola Lobby Against Xinjiang Forced Labor Bill,” which alleges — according to congressional staff and public lobbying records — that these businesses and interest groups are actively lobbying Congress to water down the Uyghur Forced Labor Prevention Act (H.R.6210 / S.3471).

“Congress must reject shameful lobbying attempts by large corporations like Nike, Apple and Coca-Cola to water down legislation that blocks imported goods made with Uyghur Muslim slave labor in China,” said CAIR Government Affairs Director Robert S. McCaw. “If it is too challenging to certify that your company is not benefiting from the Chinese Communist Party’s concentration camps, then operate in another country, preferably America.”

The Chinese government has transformed Xinjiang into repressive high-tech surveillance police state that has criminalized the practice of Islam and being Muslim – having arrested 1 to 2 million of Xinjiang’s Uyghur Muslim minority inhabitants, detaining them in barbed wired concentration camps for no other reason than practicing their Islamic faith. Many of these Uygur Muslim detainees are forced into labor by the Chinese Communist Party as part of their “re-education.”

The Uyghur Forced Labor Prevention Act, which is positioned to pass Congress and be signed into law, would impose various restrictions related to China’s Xinjiang Uyghur Autonomous region, including prohibiting certain imports from Xinjiang and imposing sanctions on those responsible for producing goods manufactured by Uyghur Muslim slave labor.

Many American companies operating in China either directly – or indirectly through supply chains – benefit from forced Uyghur Muslim slave labor. For example, Coke allegedly uses sugar sourced in Xinjiang, Nike has benefited from Uyghur laborers in prison-like conditions, and textile companies use cotton sourced from the region.

According to the New York Times, “Companies and groups lobbying on the bill have been pushing for various revisions, including easing disclosure requirements” including only “releasing certain information about supply chains to congressional committees rather than to the public.”

The act, which passed the House in September with bipartisan support – 406 to 3 – is positioned to be passed by the Senate and signed into law by President Trump or President Elect Joe Biden. The legislation would:

CAIR notes in August, the group called on the National Basketball Association (NBA) to prioritize its “commitment to social justice over profits” by ending all collaboration with the Chinese Communist Party until the government ceases its ongoing campaign of genocide against the country’s Uyghur Muslim minority.