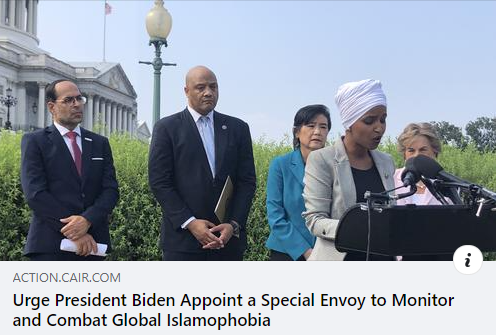 On July 21, CAIR joined a press conference at the U.S. Capitol with House Representatives Ilhan Omar (D-MN), Jan Schakowski (D-IL), Judy Chu (D-CA), Andre Carson (D-IN), and Sara Jabobs (D-CA) to publicly announce that 23 Democratic members of Congress were calling for the special envoy position as instances of anti-Muslim hate crimes continue to rise in the U.S. and worldwide.

During the event, members of Congress cited a new CAIR report that documents a sharp spike in anti-Muslim incidents in May and June as a major reason why the appointment of a special envoy must happen and happen soon.

Among the 23 Democrats that signed the letter were the House’s three Muslim members, Ilhan Omar, Andre Carson and Rashida Tlaib, and seven of the 25 Jewish Democrats in the House, including Schakowsky, Steve Cohen, Sara Jacobs, Alan Lowenthal, Mike Levin, Brad Schneiders, and Dean Phillips.

For years, CAIR has encouraged the government to appoint a special envoy to go on the offensive against the international and interconnected problem of anti-Muslim bigotry.

In January, the US Council of Muslim Organizations (USCMO) sent a letter to the Biden Administration calling on the State Department to establish the special envoy position.

From hijab bans to concentration camps to mass shootings, anti-Muslim bigotry is a global problem that requires a global solution. The United States can and should play an important role in confronting this epidemic of hate by appointing a Special Envoy to Combat & Monitor Islamophobia.

American Muslims cannot wait for the government to save us or speak up for us. American Muslims and allies to the community must unite by taking action to urge the Biden Administration to make such an appointment today.