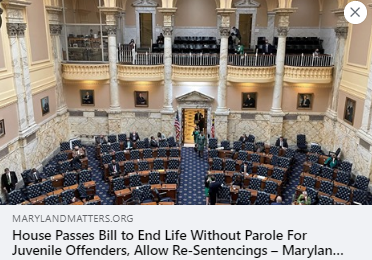 (BALTIMORE, MD, 3/31/21) – The Maryland office of the Council on American-Islamic Relations (CAIR) today applauded state lawmakers’ final move yesterday to pass the Juvenile Restoration Act and urged Governor Hogan to sign the measure into law when it is presented to him.

“Maryland has consistently ranked among the worst states in our country when it comes to juvenile justice,” said CAIR’s Maryland Director Zainab Chaudry, who testified in support of the measure. “Thanks to the leadership of lawmakers, and the tireless efforts of many activists and advocacy groups, it looks like change is here. Maryland is finally catching up to places like Virginia and Washington, D.C., on banning sentences of life without parole for children.”

CAIR’s testimony on the measure stated in part:

“According to Human Rights for Kids’ report published in 2020, Maryland is tied with five other states for being our country’s worst offenders of juvenile justice. This rating is a direct consequence of state lawmakers’ failure to update antiquated laws and not impose sentences of life without parole on juvenile offenders.

It is past time to change that, and to enact legislation in the Maryland General Assembly that creates fair, age-appropriate sentencing for children. Children deserve second chances. They deserve a fair chance at redemption and need to be provided a meaningful opportunity to demonstrate rehabilitation.

The United States Supreme Court’s ruling on multiple cases supports this measure. According to the Sentencing Project, its 2012 ruling in Miller v. Alabama, it’s now mandatory for states and the federal government to consider the unique circumstances of juvenile defendants in determining individualized sentences. In its 2016 decision in Montgomery v. Louisiana, the Supreme Court ensured that the decision would apply retroactively. A mandatory life sentence for juveniles without the possibility of parole isn’t simply unethical; it is also unconstitutional.

At least 24 states and the District of Columbia have banned such a measure; in some other states, judges are not handing out the sentence. It’s time for Maryland to be added to that list.”