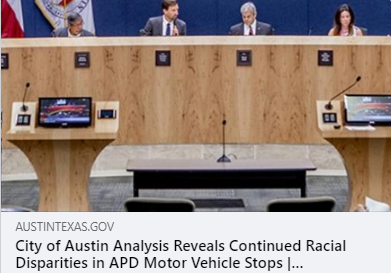 The report revealed that “in 2019, Black/African Americans and Hispanic/Latinos were overrepresented in motor vehicle stops by 6% and 2%, respectively, while White/Caucasians were underrepresented by 6%, and Asians were underrepresented by 3%,” and “Once pulled over, Black/African Americans were three times more likely to be searched than White/Caucasians and were the only racial/ethnic group to receive more high-discretion searches than low-discretion searches.”

READ: Report from The Office of Police Oversight

The analysis concludes that People of Color in Austin are still stopped in their motor vehicles at disproportionately higher rates than their percentage of the population in Austin.

“It is truly unfortunate to see that our public servants have demonstrated such bias in what is considered to be routine traffic stops,” said CAIR-Austin Government Affairs Manager William White. “It is disturbing to consider that so many of these instances of normal traffic stop across the country have turned deadly for People of Color and these same things are happening right here in Austin. We urge that concrete actions be taken to ensure that interactions between police officers and members of minority communities are based on the law, not bias.”

CAIR asks community members to be aware of their rights with law enforcement. CAIR has published a Know Your Rights with Law Enforcement brochure.

The brochure, in several languages, may be viewed at https://www.cair.com/know_your_rights/your-rights-with-law-enforcement/