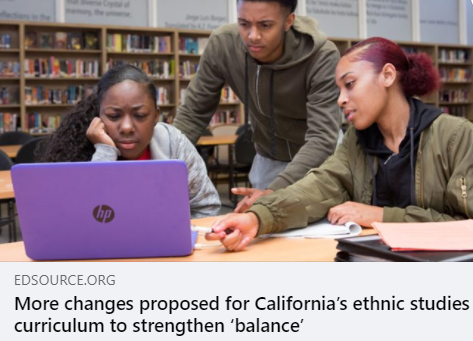 (SACRAMENTO, CA – 11/25/2020) – The California chapter of the Council on American-Islamic Relations (CAIR-LA) today joined a statewide coalition of scholars, civil rights and advocacy groups in calling for the California Department of Education (CDE) to include a lesson on Arab Americans into the final version of California Ethnic Studies Model Curriculum (ESMC).

The coalition criticized the state’s Instructional Quality Commission (IQC) recommendation to the CDE to append the Arab American lesson during the Nov. 18-19 IQC meeting. The state Department of Education will oversee ESMC edits in the model’s next phase.

According to EdSource, the original draft of the ESMC was written in the spring of 2019. The goal of the ESMC was to create new lesson plans and resources that covered more ethnic and racial groups outside of Latino Americans, Black Americans, Native Americans and Asian Americans, which have been traditionally covered in college ethnic studies courses.

State Superintendent of Public Instruction Tony Thurmond subsequently shifted a lesson about Arab Americans to an expanded appendix of resources and lesson plans for various Asian subgroups, including Laotians and Filipinos, as well as Sikhs and Jews.

In a letter to educators throughout the state, SAAS wrote:

“We are outraged that the expertise of ethnic studies practitioners and the Arab American community continues to be ignored as people with little knowledge of, or experience in the field get to set the terms.

“We refuse to accept the pedagogically and academically unsound Arab American lessons in the appendix. In today’s political climate, ethnic studies is more important than ever.  All our students need and deserve education to help them navigate the oppression they face based in the principles, values and pedagogy on which ethnic studies was founded.”

“The current version of the ESMC not only tactfully goes out of its way to make Arabs and Muslims a footnote in history, but it also caves into larger political demands to gut the core tenants and purpose of ethnic studies.”

“The fight for inclusion is far from over. We look forward to work with our coalition partners to secure a real ethnic studies course to California students.”

By law, the state Board of Education must adopt the curriculum framework by March 31, 2021.