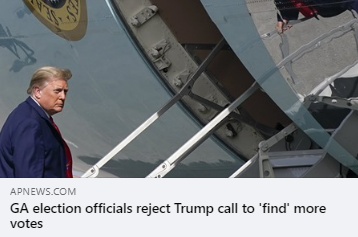 CAIR, the nation’s largest Muslim civil rights and advocacy organization, is also calling on all members of Congress to respect the results of the national presidential election and certify in a joint-session President-elect Joe Biden’s 306 to 232 electoral college victory – following reports that Senator Ted Cruz and a dozen other Republican lawmakers plan to voice objections to the results of the electoral college certification process.

“The President is soliciting election fraud by pressuring the Secretary of State to change the election results. This is a textbook definition of election fraud and it’s a crime. We’ve had multiple recounts and an audit,” said CAIR Georgia Executive Director Abdullah Jaber. “Our elected officials and poll workers followed the process by diligently counting and recounting more than 5 million votes and the election was determined by the Secretary of State to be fair and accurate.”

Jaber added: “Undermining institutional forbearance, the president continues to threaten and erode democratic norms with his actions further polarize our communities. The people of Georgia have voted, the results are clear, and we demand our Representatives to respect and uphold the results”

“Trump’s brazen abuse of power and possibly illegal attempt to alter the outcome of the presidential election in Georgia merits a state criminal investigation,” said CAIR National Executive Director Nihad Awad. “On Wednesday, Congress must certify the results of the Electoral College and turn a new page for the country. It’s time we start ignoring the nation’s sorest and saddest loser, soon to be former President Trump.”

As reported over the weekend by the Washington Post and Associated Press (AP), a tape has emerged of Trump on an hour-long call with Georgia Secretary of State Brad Raffensperger and his legal counsel, Ryan Germany, threatening them with a “criminal offense” to find thousands of ballots in Fulton County, where Trump repeated debunked claims that ballots in his favor had been destroyed and voter fraud occurred.

During the recorded conversation on the tape, Trump demanded:

“All I want to do is this. I just want to find 11,780 votes, which is one more than we have. Because we won the state. And flipping the state is a great testament to our country.”

Trump went on to threaten both Raffensperger and Germany saying they could be criminally liable if they failed to find thousands of ballots in Fulton County, stating:

“The ballots are corrupt, and you are going to find they are, which is totally illegal. It’s… it’s more illegal for you than it is for them because you know what they did, and you are not reporting it. That’s the thing, that’s a criminal offense and that’s a big risk to you and Ryan.”

CAIR notes after three official Georgia state election voter ballot counts and re-counts and a state law enforcement investigation, it was determined that the election was clean and fair without any sign of voter fraud.

Georgia is home to an estimated 150,000 American Muslims, including at least 71,000 registered Muslim voters. In the run-up to the November general election, CAIR-Georgia and the Georgia Muslim Voter Project launched the “CAIR 2 Vote” initiative, which helped lead to record-breaking numbersin theGeorgia voter turnout.