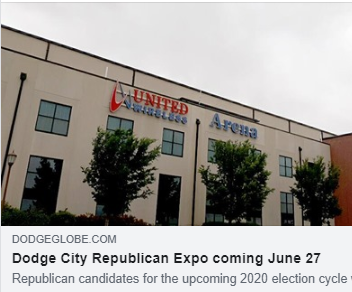 (WASHINGTON, D.C., 6/12/20) — The Council on American-Islamic Relations (CAIR) and its Kansas chapter are calling on the Kansas Republican Party and the United Wireless Arena in Dodge City, Kan., to drop anti-Muslim hate group leader John Bennett as a keynote speaker at the Dodge City Republican Expo.

Bennett, who has called for the removal of American mosques and calls Islam a “cancer,” is the Vice President of Understanding the Threat (UTT) whose founder and President John Guandolo yesterday called for the “execution” of anti-racist protest leaders. Guandolo said: “[W]e should round up the leaders and execute them for trying to revolt and overthrow the government.”

LISTEN: Leaders of BLM And ANTIFA Should Rounded Up and Executed Says John Guandolo [Audio]

Both CAIR and the Southern Poverty Law Center (SPLC) have designated Understanding the Threat an anti-Muslim hate group.

“The Kansas Republican Party, its affiliates and the United Wireless Arena should not provide a legitimizing platform for a disgraced anti-Muslim hate group leader like John Bennett to spread his message of bigotry,” said CAIR Director of Government Affairs Robert S. McCaw.

“We urge Kansas Republican leaders and United Wireless Arena to do what is right and drop a speaker who promotes the kind of bigotry that we are seeing challenged every day at anti-racist protests nationwide,” said CAIR-Kansas Board Chair Moussa Elbayoumy.

He noted that in 2014, CAIR-Kansas expressed opposition to Sedgwick County Sheriff’s bringing John Guandolo citing his record of inciting hate against Islam,

Incitement against Islam in that part of the state resulted in increased hate crimes against Muslims and Muslim business and places of worship.

In 2017, CAIR-Oklahoma issued a statement in response to an Islamophobic social media post by then state Rep. John Bennett calling for the removal of American mosques.

Bennett’s Facebook post, which has since been taken down, suggested that if Confederate monuments are being removed because of the Civil War, mosques should also be removed due to 9/11.

Bennett, a former Republican Oklahoma State House representative with a long history of making anti-Muslim remarks, has called Islam “a cancer that needs to be cut out of the nation” and repeatedly stated that he does not consider Islam to be a religion.

Background: Understanding the Threat and Its Founder and President John Guandolo

Guandolo is a disgraced ex-FBI agent and anti-Muslim extremist who has long peddled conspiracy theories about Islam and Muslims.


Guandolo is an infamous Islamophobe who claims a former CIA director was a “secret Muslim” and that Muslim hotel managers, cabbies and 7-11 workers seek to take over America.

He stated that the US Justice Department should have prevented two Muslim women from being elected to Congress and has also claimed that former CIA Director John Brennan was a secret Muslim.

Guandolo has stated that if he was “anointed king,” he would execute those, including Democratic and Republican leaders who he claims are “advancing a radical Marxist Islamic agenda in the United States.”


Among his many other bizarre and Islamophobic claims, Guandolo has falsely claimed that:


In 2018, CAIR welcomed a decision by Tennessee’s Trevecca Nazarene University to cancel an anti-Muslim event that would have featured three Islamophobic speakers, including Guandolo.

The FBI was asked to investigate an image tweeted by Guandolo’s hate group that purported to show the bombing of “CAIR HQ” in Washington, D.C. Guandolo, who has previously tweeted that “CAIR needs to be obliterated,” re-tweeted the bombing image on his personal account. Earlier this month, Guandolo tweeted that “Islam is evil & barbaric.”