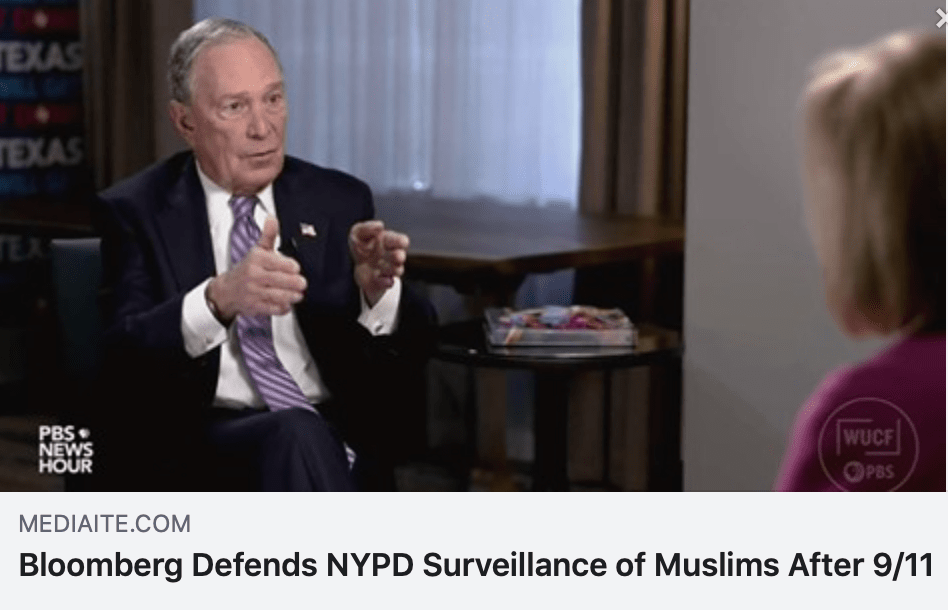 That surveillance was part of a comprehensive NYPD human mapping program that spied on and infiltrated Islamic institutions, including houses of worship, student groups and businesses that cater to the Muslim community. The NYPD also recruited informants it referred to as “mosque crawlers” to monitor religious sermons without any suspicion of wrongdoing. Police officials acknowledge that the program generated zero criminal leads.

In 2014, the NYPD disbanded its special unit that conducted widespread warrantless surveillance of law-abiding Muslims and settled one – of several lawsuits – in 2018, agreeing not to conduct surveillance based on religion or ethnicity, paying $75,000 in damages and $1 million dollars in legal fees.

“It’s shameful that former New York Mayor Michael Bloomberg continues to double-down in defense of his and the NYPD’s unconstitutional and predatory mass spying on Muslim communities in New York and New Jersey.

“Bloomberg should instead be apologizing for his role in the NYPD’s religious profiling and spying on Muslims communities – just as he apologized for NYPD’s discriminatory stop-and-frisk program.

“In the course of six years, the NYPD’s now-disbanded and incredibly illegal surveillance program of infiltrating and spying on Muslim communities, houses of worship and student clubs, generated zero criminal leads.

“CAIR believes that in addition to costing taxpayers hundreds of millions of dollars, the NYPD’s illegal spying program under Bloomberg’s leadership damaged the Muslim community’s trust in law enforcement and made it difficult for the NYPD to maintain open lines of communication.”

“It is pure hypocrisy to issue an apology for illegal racial profiling through Stop and Frisk while simultaneously affirming massive religious and nationality-based surveillance against Muslims.

“Mayor Bloomberg’s latest defense of the NYPD’s Demographic’s Unit demonstrates his continued belief that certain populations are inherently suspicious, warranting law enforcement’s targeting of particular communities. Defending these tactics against all American Muslims is immoral, racist and a threat to all marginalized communities.”

Last week, CAIR joined other Muslim advocacy organizations in a letter to Bloomberg demanding that he apologize for the leadership role he played in the NYPD’s secret surveillance of Muslim communities.