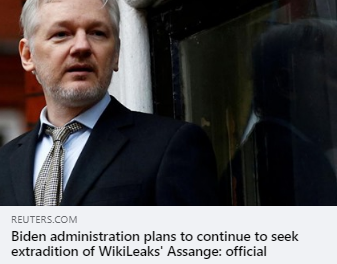 (WASHINGTON, DC – 2/10/2020) — The Council on American-Islamic Relations (CAIR), the nation’s largest Muslim civil rights and advocacy organization, today called on the Biden Administration to end the Justice Department’s ongoing effort to extradite and prosecute Julian Assange for his role in exposing evidence of war crimes committed by U.S. forces during the occupation of Iraq.

Earlier today, a Justice Department spokesperson announced that prosecutors plan to carry on the Trump administration’s effort to prosecute Assange by appealing a British judicial ruling that barred Assange’s extradition to the United States. The British ruling cited the risk that the prison system in the United State could threaten his mental health and safety.

“We encourage the Biden administration to withdraw its extradition request and dismiss the charges filed against Julian Assange related to WikiLeaks’ exposure of war crimes in Iraq. CAIR believes that the Obama Administration’s prior decision to not request the extradition of Assange was in line with the First Amendment’s protections of the free press and journalists.

“Prosecuting Julian Assange for exposing war crimes committed in Iraq would chill free speech, undermine freedom of the press and harm America’s image around the world. The only people should face prosecution today are the war criminals that WikiLeaks exposed over ten years.”

In 2010, WikiLeaks released government materials related to American military operations in the Middle East. The release included footage showing U.S. helicopter pilots in Iraq making jokes as they opened fire on a group of non-combatants that included civilians and journalists, as well as on Iraqis who came to their aid, killing numerous civilians and seriously wounding two children.

During the Obama Administration, the Justice Department did not pursue charges against Assange for his role in receiving and publishing the documents “on the grounds that what Assange and WikiLeaks did was too similar to journalistic activities protected by the First Amendment of the U.S. Constitution.”

According to Reuters, “Trump administration officials stepped up public criticism of Assange and WikiLeaks only weeks after taking office in January 2017 and subsequently filed a series of increasingly harsh criminal charges accusing Assange of participating in a hacking conspiracy.”