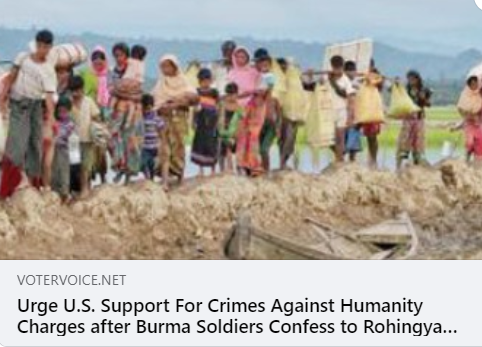 (WASHINGTON, D.C., 9/9/2020) – The Council on American-Islamic Relations (CAIR), the nation’s largest Muslim civil rights and advocacy organization, today called on the United States and the international community to take concrete steps against Myanmar (Burma) following video confessions from two soldiers of that nation’s military who say they took part in a genocidal campaign against the Rohingya Muslim minority.

CAIR called for those responsible for the genocide to be charged with crimes against humanity.

In the videos, the soldiers confess to executions, mass killings and burials, destruction of villages, and rape on the orders of commanding officers. One of the soldiers says he was told, “Shoot all you see and all you hear.”

The two men were transported to The Hague, where the International Criminal Court (ICC) is investigating whether military leaders committed large-scale crimes against Rohingya Muslims.

SEE: ‘Kill all you see’: In a first, Myanmar soldiers tell of Rohingya slaughter (NY Times)

“It has been clear for some time that the Rohingya Muslim minority in Myanmar has been systematically targeted by a brutal campaign of genocide. These confessions by low level participants in the genocide must lead to strong actions by the international community – including charges of crimes against humanity — to bring to justice all those who gave the orders or turned a blind eye to the killing, rape, abuse, and displacement. Our nation should also sever relations with Myanmar until the perpetrators and their enablers – including Aung San Suu Kyi — are charged and removed.”

He noted that CAIR has been speaking out about the ongoing genocide against Rohingya Muslims and the international community’s lack of action on the issue.

SEE: CAIR Rep Delivers Letters of Thanks to The Gambia for ICJ Legal Defense of Rohingya Muslims