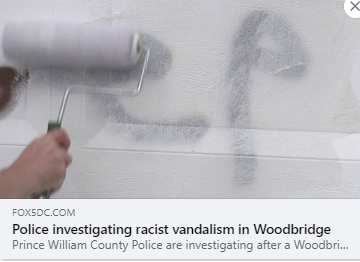 (WASHINGTON, D.C., 4/1/2021) — The Council on American-Islamic Relations (CAIR), the nation’s largest Muslim civil rights and advocacy organization, today called for a hate crime investigation of racist vandalism targeting a family in Virginia and also welcomed a ruling on the removal of Confederate monuments in that state.

Prince William County Police in Woodbridge, Va., are investigating the hate vandalism, which included the N-word and other slurs spray-painted on the home of a family of Nigerian heritage.

“Law enforcement authorities should consider the possibility of hate crime charges whenever evidence indicates a clear bias motive,” said CAIR National Communications Director Ibrahim Hooper. “All Virginians should speak out against continuing systemic anti-Black racism and white supremacy, and also against the symbols of white supremacy such as Confederate memorials.”

He noted that Virginia law defines a hate crime as “a criminal act committed against a person or his property with the specific intent of instilling fear or intimidation in the individual against whom the act is perpetrated.”