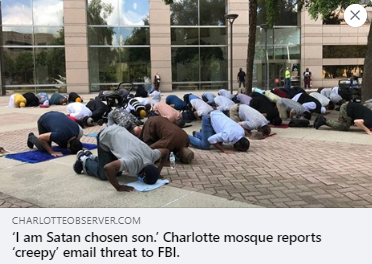 Officials with the Islamic Center of Charlotte reported that the email said, “every mosque from here to Bahrain will turn to dust,” after beginning “You have no Islamic rights in this country, you’re [sic] children and women are ours.” It also stated: “No mayor, no city, county, state police, fbi, cia, [sic] or the military can stop me.” An FBI agent told the mosque that the email did not rise to the level of a threat for which a person could be arrested and charged.

A mosque spokesperson told local media the email “is definitely a threat. It’s a threat on so many different levels. Somewhere the letter says do away with all Muslims. And with us being visible … we are one of the targets, and we have been one of the targets.”

This was not the first time the mosque received such threatening messages.

2012 Threat: Threat letter to Islamic Center: We have no problem killing Muslims

“Threats and intimidation targeting houses of worship should be taken seriously by local, state and federal law enforcement authorities and those responsible should be brought to justice,” said CAIR National Communications Director Ibrahim Hooper.

Hooper noted that CAIR recently called for a similar probe of an alleged bias-motivated assault on Muslim women waiting to pick up their children after school in northern Virginia.

Video: CAIR Urges DC-Area Mosques to Step Up Security for End of Ramadan After Attempted Stabbing