CAIR Calls for ‘Immediate Action’ Against Wisconsin Officers Who Tased, Shot Unarmed Black Man Jacob Blake in Back, in Front of Children 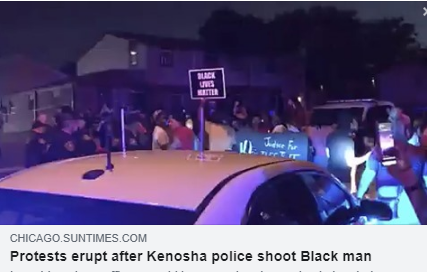 (WASHINGTON, D.C., 8/24/2020) – The Council on American-Islamic Relations (CAIR) today called for “immediate action against any and all officers who violated the law” during a police encounter Sunday in Kenosha, Wis., that ended when an officer shot an unarmed African-American man numerous times in the back in front of his young children.

The shooting, captured on cellphone video, shows Jacob Blake walking around the front of his SUV to his driver-side door as officers follow him with their guns pointed at him. As Blake opens the doorand attempts to enter the car, an officer grabs him from behind and opens fire while Blake has his back turned. Seven shots were fired. Blake was hospitalized in serious condition. Three officers were placed on administrative leave.

Wisconsin Gov. Tony Evers issued a statement identifying Blake as the victim and condemning the shooting. Evers said in part: “While we do not have all of the details yet, what we know for certain is that he is not the first Black man or person to have been shot or injured or mercilessly killed at the hands of individuals in law enforcement in our state or our country.”

“Enough is enough. The fact that these horrific and unnecessary shootings continue to occur serves as further proof that we must quickly and radically reform the way that law enforcement agencies operate, especially in communities of color.

“We join Muslims across America in praying for God to grant swift justice and complete healing to Jacob Blake. We also call for authorities to take immediate action against any and all officers who violated the law by confronting and then shooting Jacob Blake after he reportedly attempted to break up a fight.”

He noted that last week, CAIR and its Arizona chapter (CAIR-Arizona) demanded a transparent and independent criminal investigation and the firing of officers involved in the 2017 killing of Muhammad Muhaymin Jr., a Black Muslim man.