CAIR Calls for Investigation into Navy Chaplain in Virginia Who Wrote that Islam is ‘Evil,’ Compared Faith to Nazism 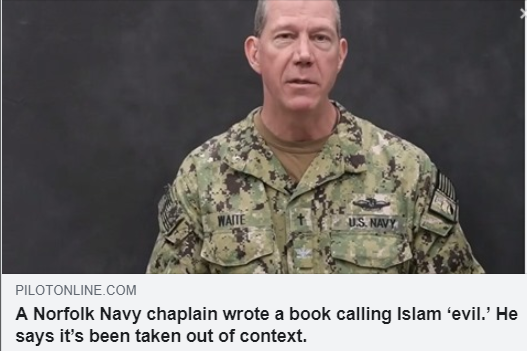 (WASHINGTON, D.C., 8/21/2020) – The Council on American-Islamic Relations (CAIR), the nation’s largest Muslim civil rights and advocacy organization, today called for the military to investigate a U.S. Navy chaplain who once wrote that Islam is “evil” and compared the faith of millions of American Muslims to Nazism.

In his book “Islam Uncovered,” published in 2002, Chaplain Brian Waite wrote that the world would inevitably see terrorist strikes “in the name of Allah.” “Some of these attacks may occur within the borders of our own nation by the remaining cell groups interspersed and hiding among the Muslim population of the United States.” He also wrote: “Should Islam be immune from attack because it calls itself a religion?. . .If Adolf Hitler called Nazism a religion, would we be speaking German today? Evil is evil, no matter what nomenclature it hides under.”

Waite is now a captain stationed in Norfolk, Va. He now says, “A number of statements in the book have been taken out of context.”

A spokesperson for the Navy’s Chief of Chaplains told a media outlet that there is no record of an investigation into Waite’s views based on the book and the office is not conducting one.

SEE: A Norfolk Navy chaplain wrote a book calling Islam ‘evil.’ He says it’s been taken out of context.
https://www.pilotonline.com/military/vp-nw-navy-chaplain-islam-20200821-pt36jcijkzgh5bxybirlgzzjdy-story.html

“We urge Navy officials to investigate this matter. If Chaplain Waite has truly changed and hasn’t expressed such bigotry in recent years, that would be wonderful. But if the Navy finds that Chaplain Waite has continued to promote hateful views, he should be removed from his position. Anyone is free to espouse inaccurate and bigoted opinions, but no one who does so should hold positions of authority over our nation’s military personnel.”

CAIR-Florida’s Communication Director Wilfredo Ruiz, a veteran Naval officer who served in the Navy JAG Corps and in the Navy Chaplain’s Corps, said: “Chaplain Brian Waite’s expressions on Islam and Muslims are incompatible with his oath and our Navy’s mission and guiding principles. Navy chaplains are expected to respect the right of others to hold spiritual beliefs and practices different from our own, and are bound to facilitate for all religious beliefs.”