CAIR Calls for the Removal of Confederate Monuments in Virginia and North Carolina, Condemns Racist Remarks From New Mexico Senator 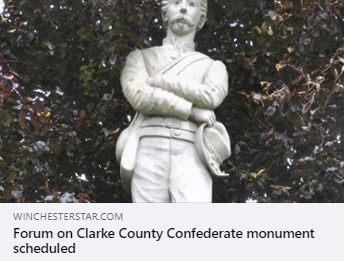 (WASHINGTON, D.C., 2/23/2021) – The Council on American-Islamic Relations (CAIR), the nation’s largest Muslim civil liberties and advocacy organization, today called for the removal of confederate monuments in Berryville, Va. and in Morganton, N.C, and condemned racist remarks by a state senator in Santa Fe, N.M.

In Berryville, Va., a county-appointed citizens committee is set to hold a forum on March 4 to determine if a Confederate monument outside the Clarke County Courthouse should be removed.

In Santa Fe, N.M., members of Black organizations, committees, and community activists are asking for a public apology as well as stronger condemnation of several racist remarks from Republican lawmakers. During a confirmation hearing, Senate Minority Leader Greg Baca questioned Cabinet nominee Sonya Smith about her ethnicity and implied that since Smith is African-American, she would be unable to serve the various demographics in New Mexico.

“Racist rhetoric and symbols of racism and white supremacy must be removed from our society if we are to move forward untainted by bigotry,” said CAIR National Communications Director Ibrahim Hooper.

He added that Washington, D.C.–based CAIR and the American Muslim community are standing in solidarity with all those challenging anti-Black racism, xenophobia, Islamophobia, anti-Semitism, and white supremacy.