CAIR Calls on Arkansas Sen. Tom Cotton to Resign for Saying the Enslavement of Black Americans was a ‘Necessary Evil’ 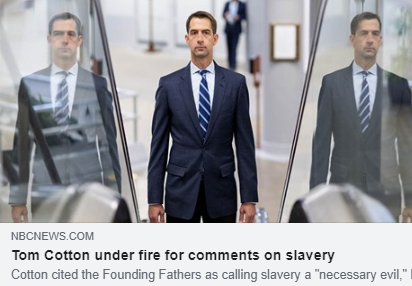 (WASHINGTON, D.C., 7/27/2020) – The Council on American-Islamic Relations (CAIR), the nation’s largest Muslim civil rights and advocacy organization, today called on Sen. Tom Cotton (R-AK) to resign after attempting to justify the enslavement of Black men, women and children in America by saying that it was a “necessary evil upon which the union was built.”

In an interview with the Arkansas Democrat Gazette published on Sunday, Cotton stated: “As the Founding Fathers said, it was the necessary evil upon which the union was built, but the union was built in a way, as Lincoln said, to put slavery on the course to its ultimate extinction.”

SEE: Sen. Tom Cotton under fire for comments on slavery

“Both as Muslims and as human beings, we know that evil is never necessary. Whether it is the rape, torture and enslavement of Black Americans because of the color of our skin, or the genocide of indigenous Americans, evil is simply evil. Anyone who claims otherwise should not hold public office. Tom Cotton should resign.”

Cotton’s racist remarks were made in support of a bill he recently introduced that seeks to prevent federal education funding for the New York Times Magazine’s 1619 Project.

The 1619 project is an educational initiative in U.S. schools that “aims to reframe the country’s history by placing the consequences of slavery and the contributions of Black Americans at the very center of our national narrative,” starting with the 1619 arrival of slave ships in Virginia.

Last week on Fox News, Cotton compared protestors engaged in vandalism in Portland to the Confederacy and “insurrectionists,” calling for the president to send in federal law enforcement.