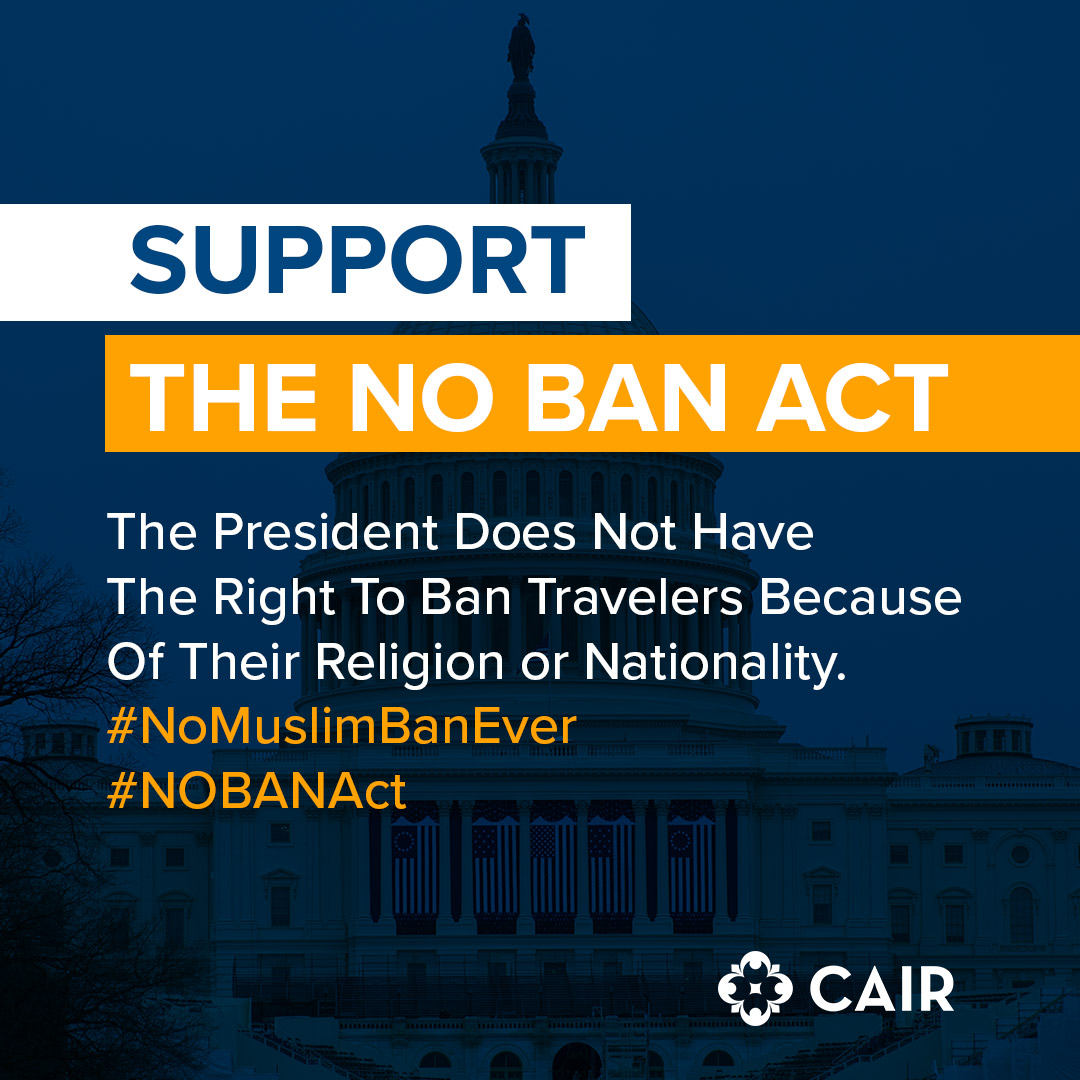 (WASHINGTON, D.C., 3/11/21) – The Council on American-Islamic Relations (CAIR), along with its San Francisco Bay Area (CAIR-SFBA) and Maryland offices, today called on House Speaker Nancy Pelosi (CA-12) and House Majority Leader Steny Hoyer (MD-5) to immediately schedule the No Ban Act for a vote on the House floor.

CAIR is calling on Speaker Pelosi and Majority Leader Hoyer to work with House Judiciary Committee Chair Jerry Nadler (NY-17) and Chair of the Immigration and Citizenship Subcommittee Zoe Lofgren (CA-19) to release the NO BAN Act from the committee for a vote.

The No Ban Act, which changes immigration law to prohibit discrimination based on religion and limits executive authority to issue future bans like the Muslim and African Bans, was re-introduced by Representative Judy Chu (CA-32) and 137 original co-sponsors on February 25.

The House has not scheduled a House floor vote for the NO BAN Act but they must do so before April to avoid potential harmful amendments to the existing language.

“CAIR strongly encourages Speaker Pelosi and Leader Hoyer to do right by the American Muslim community – and Muslims across the world – by scheduling the NO BAN Act for a floor vote before it becomes vulnerable to harmful amendments,” said CAIR National Executive Director Nihad Awad. “Passage of the NO BAN Act was celebrated by Democratic leaders in the last Congress – now is the time re-adopt this act and ensure no U.S. president is ever again able to ban travelers because of their religion or nationality.”

“San Francisco Bay Area residents are urging Speaker Pelosi to schedule a vote for the NO BAN Act to provide relief to families who have been living with uncertainty and fear for years. We must prevent future presidents from imposing bans that discriminate against people because of their faith,” said CAIR San Francisco Bay Area Executive Director Zahra Billoo.

“Maryland Muslims are urging House Majority Leader Hoyer to do right by our community and immediately schedule a vote on the NO BAN Act, “said CAIR Maryland Director Zainab Chaudry. “Muslims in Prince George’s, Anne Arundel, Charles, St. Mary’s, and Calvert counties are counting on Congressman Hoyer to ensure the NO BAN Act remains untouched by harmful amendments.”

First introduced in the last Congressional session by Rep. Chu and Senator Chris Coons (DE D), the NO BAN Act would:

Because of the ban families have been ripped apart, students have been deprived of educational opportunities, the sick have been blocked from receiving treatment, talented workers have lost out on jobs, and refugees have been trapped in dangerous conditions.

On January 20, CAIR welcomed President Joe Biden’s termination — on his first day in office — of the previous administration’s discriminatory Muslim and African Bans.

On March 8, the State Department announced the results of its 45-day review of immigration processes, which was mandated by an executive order President Biden signed repealing the Muslim Ban.

The department’s announcement also states, “Applicants from the affected countries may no longer be denied on the basis of nationality, and the Department has taken a number of steps to ensure that applicants previously refused visas under Proclamations 9645 and 9983 will not have future visa applications prejudiced in any way by those prior decisions.”

CAIR believes that any immigrants whose visa applications were unjustly denied because of the Muslim Ban should receive both fast-tracked reconsideration and a waiver of the application fees they have already paid. CAIR is calling on the Biden administration to be creative and work with community-based groups to bring relief to all the families that were separated and harmed because of the discriminatory and xenophobic bans.

CAIR is also calling on the State Department to do more for Diversity Visa application winners who were not issued visas due to the Muslim and African Bans. CAIR is encouraging the Biden administration to work with Congress to find alternative immigration pathways for these would-be immigrants who are being denied a chance at the American dream.