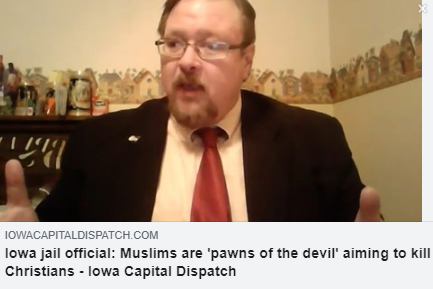 (WASHINGTON, D.C., 4/16/20) – The Council on American-Islamic Relations, the nation’s largest Muslim civil rights and advocacy organization, today urged Muscatine County, Iowa, Sheriff C.J. Ryan to fire County Jail Administrator Dean Naylor in response to recent revelations that Naylor posted 11,500 word online treatise titled,  “End Times — We Are Here!!,” characterizing all Muslims as the “pawns of the devil” and the “beast” that will sometime soon “hunt” all Christians and Jews.

Naylor has also posted on YouTube that he believes such a conflict between Christians, Jews and Muslims will occur between 2016 and 2023, and result in the death of one-third of mankind.

McCaw notes that Naylor’s end-times beliefs do not reflect mainstream Christian views but are his own personal interpretations of the Book of Revelation, a chapter of the Bible.

Naylor oversees a 250-bed prison that often houses Muslim inmates. In 2013, a federal lawsuit against Naylor was filed that claimed as jail administrator he denied a Muslim inmate’s request for a Quran.

In his “End Times — We Are Here!!” treatise, Naylor writes:

Following reports of Naylor’s anti-Muslim treatise, the neighboring Johnson County Board of Supervisors sent a letter of concern to their Muscatine County counterparts.

At present, Sheriff C.J. Ryan has declined to take actions stating his: “concern is the actions of my employees, not their personal beliefs. I have no comment on the personal beliefs of Mr. Naylor or any of my other employees.”