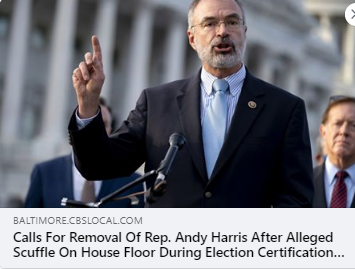 (BALTIMORE, MD, 1/7/21) – The Maryland office of the Council on American-Islamic Relations (CAIR), the nation’s largest Muslim civil rights and advocacy organization, today called on the Maryland Republican Party to condemn and rebuke that state’s lone Republican Congressman Andy Harris for his attempt to overthrow a legitimate election by objecting to count electoral votes from certain states, and for his support of yesterday’s insurrection on Capitol Hill that left four people dead.

“Our representatives in Washington take an oath to uphold and defend the United States Constitution,” said CAIR’s Director in Maryland Zainab Chaudry. “Congressman Harris has disregarded the will of voters in Maryland and across the country by attempting to overturn a legitimate election and demonstrated through his behavior that he is unfit to serve in public office. We urge the Maryland Republican Party’s State Central Committee to rebuke and condemn his actions and to take appropriate disciplinary action.”