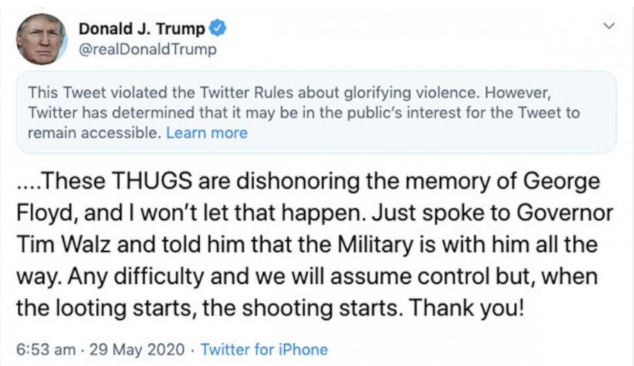 (WASHINGTON, DC – 5/29/2020) – The Council on American-Islamic Relations (CAIR), the nation’s largest Muslim civil rights and advocacy organization, today condemned President Trump’s “racist threat of violence” against protesters, called for the suspension of both his and the White House’s Twitter accounts, and encouraged the Minnesota National Guard to affirm that it will disobey any unlawful orders to harm protesters.

Amid protests and unrest in Minneapolis last night, President Trump posted a tweet that condemned “thugs” for “looting” in Minneapolis, threatened to intervene with the National Guard, and declared “when the looting starts, the shooting will start.”

“President Trump’s threat to shoot ‘thugs’ for ‘looting’ in Minneapolis was a blatantly racist call to violence worthy of Bull Connor.

“As despicable as President Trump’s words were, no one should be surprised that the man who praised neo-Confederates, neo-Nazis and other armed white militants is now smearing and threatening unarmed black protesters.

“The Minnesota National Guard should publicly affirm that it will not obey such unlawful orders, and Twitter should suspend the accounts of both the White House and President Trump for posting this racist threat of violence.”

[NOTE: “Bull” Connor was an Alabama official who sparked outrage nationwide by permitting and directing brutal violence against civil rights activists in the Birmingham during the 1960s.]

CAIR also noted that Trump’s use of the word “THUGS” is a race-coded word that bigoted politicians use to negatively describe African-American protestors.


In 2015, following the death of African-American Baltimore resident Freddie Grey and city wide protests Trump posted a similar racist tweet: “Our great African American president hasn’t exactly had a positive impact on the thugs who are so happily and openly destroying Baltimore.”

Last July, CAIR and the Maryland State Conference of the NAACP (NAACP MSC) denounced Trump’s racist tweets labeling Baltimore a “disgusting, rat and rodent infested, dangerous and filthy mess” and claiming that “no human being would want to live there.”

Yesterday, the Minnesota chapter of the Council on American-Islamic Relations (CAIR-Minnesota) joined other civil rights and community organizations at a peaceful protest calling for the arrest of the four former Minneapolis police officers whose actions and inactions resulted in the killing of George Floyd.

Protesters also demanded that Governor Walz use his powers to appoint a special prosecutor not affiliated with the Hennepin County Prosecutor’s office or the Attorney General’s office.