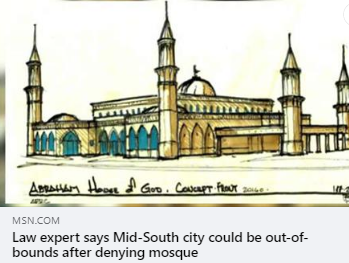 (WASHINGTON, D.C, 5/5/21) – The Council on American-Islamic Relations (CAIR), the nation’s largest Muslim civil rights and advocacy organization, today called on the City of Horn Lake, Miss., and that city’s mayor and board of aldermen to comply with federal religious land use law and reverse their denial of a site plan for the proposed Abraham House of God mosque.

The City of Horn Lake Board held an executive session on Tuesday following a lawsuit filed last Wednesday by site developer and Abraham House of God President Ray Elk that claims the city violated the Religious Land Use and Institutionalized Persons Act of 2000 (RLUIPA).

“CAIR is calling on City of Horn Lake leaders to comply with the Religious Land Use and Institutionalized Persons Act of 2000 (RLUIPA) by immediately reversing their questionable site plan denial for the Abraham House of God mosque.

“It’s shocking that the City of Horn Lake would deny the mosque’s site plan when the plot had already been approved by the city’s former planning director for a church. If the same stretch of road can accommodate three churches, then there should be no reason to deny a neighboring mosque.

“One of the city’s aldermen has reportedly expressed that his anti-Muslim views informed his denial of the mosque’s site plan, making the city vulnerable to RLUIPA complaints submitted to the Department of Justice.”

While the city voted against the mosque’s site plan citing traffic and water issues, the Board of Aldermen also raised the possibility of noise complaints stemming from a hypothetical call to prayer being made over loudspeakers – despite assurances from the site planner there were no plans to install loudspeakers or make a public call to prayer.

The city’s former planning director reported to the city that a church is an allowable use for where the mosque is being proposed to be built.

Alderman Charlie Roberts who voted to deny the mosque’s site plan has reversed his position and now plans to bring the application back before the board.

However, Alderman John Jones Jr. told the Memphis Commercial Appeal that he continues to oppose the mosque’s site plan and expressed Islamophobic and anti-Muslim views to the daily newspaper:

“I don’t care whether it’s federal law or violation of whatever, the thing is it’s unsafe for the people to build that mosque there. It’s grossly out of character for that neighborhood. It’s dangerous for the traffic to be on that road. Nobody wants the noise that’s gonna come with it,” adding, “It’s dangerous for people to be driving up and down that road listing to noise seven days a week when other people go to church one day a week and are quiet, saying their prayers and are quiet, I don’t care what they say, their religion says they can lie or do anything to the Jews or gentiles because we’re not Muslims.”